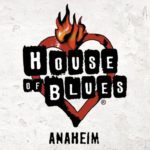 I hadn’t been to the Anaheim House of Blues in quite some time, but tonight I was there to see Testament with openers Sepultura and Prong.

Always a treat to see Tommy Victor and his band Prong. They played an assortment of songs, new and old ranging from “Ultimate Authority” to old classics like “Beg to Differ” and “Snap Your Fingers, Snap Your Neck.” A great way to open the night. And don’t forget, next weekend Tommy will be playing guitar with Danzig at the “Blackest of The Black Fest.”

Next came the Brazilian veterans. It had been awhile since I’d seen Sepultura live. They were stoked to be on stage and ran through tons of classics like “Refuse/Resist,” “Roots Bloody Roots,” and “Inner Self.”

Definitely a high energy set that prepared the crowd for the headliner.

Finally it was time for Testament. They busted out with “Brotherhood of the Snake” which got the crowd going. Lead singer Chuck Billy was in top form as the full metal assault of Testament owned the stage. A very in your face approach to metal which had the crowd roaring.

The set list was a diverse set of both old and new material. Some of the songs included “Low,” “Into the Pit,” Throne of Throns,” “Souls of Black,” and many more. Overall a great mosh pit and crowd that welcomed “Testament” to Anaheim.

All photos are © 2017 Maurice Nunez based in Los Angeles, California.

In preparation of their upcoming special edition 2CD, 2LP and digital rarities and covers compilation, “Coded Smears And More Uncommon Slurs”, out on March 30 via Century Media Records, UK’s grindcore pioneers NAPALM DEATH have revealed a […]

Brazilian thrash metal heroes Sepultura are proud to announce they have rescheduled their North American Tour for March and April of 2021. The 31-date trek which will include performances from Sacred Reich, Crowbar and Art […]

This drummer is key in making Testament‘s mark in metal history. The band is very excited to welcome back one of the greatest drummers in heavy metal…Take your pick, one in one hundred, I don’t […]