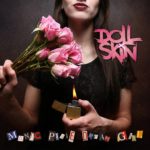 Doll Skin is an all-female rock band from Phoenix, Arizona, with vocalist/guitarist Sydney Dolezal, bassist Nicole Rich, Alex Snowden on guitar and Meghan Herring on drums came to Omaha and performed their killer set at the Lookout Lounge in Omaha, Nebraska on Monday, May 15, 2017 in supporting of their first upcoming full-album Manic Pixie Dream Girl; follows up to their first two EPs – 2015’s In Your Face and 2016’s In Your Face (Again); which will be in stores June 16th EMP Label Group/AMPED, and in Europe June 23th via EMP/SPV. Their performance is a blend of punk, metal alternative, pop and rock, same idea to bands ranging from The Donnas to The Go-Go’s and to The Runaways, has toured with Otep, Lacey Sturm, Fire from the Gods, HELLYEAH, Escape the Fate, Omaha’s Through Fire and more.

On their set, five out of 9 they played new songs from their upcoming album including their recent hit Shut Up (You Miss Me).

They continue touring this summer.  Their tour schedule can be seen HERE, including Vans Warped Tour ’17 from June 16 at CenturyLink Field in Seattle, Washington to June 25 at Pepsi Center in Denver, Colorado.  If they come near you, don’t miss them!

As soon as their set was over, they personally gave me a piece of paper of their setlist via one of members’ handwriting.  That added to my collection! 😉

Omaha’s hard rock band Through the Stone, Never Say Die – an alternative metal based out of Toronto, ON Canada; and Des Moines’ thrash metal Death Green were their opening acts. The photos of those bands will be posted shortly.

The photos of their show can be seen HERE.

Omaha Sings the Blues at the Ralston Arena

BY JOE DeSANTI | Go Venue Magazine On Wednesday August 28th, Kenny Wayne Shepherd Band and Buddy Guy played for an enthusiastic crowd at the Ralston Arena, in Omaha, Nebraska.  Surprisingly, the show wasn’t sold out, but the fans in […]

BY DEAN BIRKHEIMER | Go Venue Magazine “But if you’re going to dine with them cannibals, sooner or later, darling, you’re gonna get eaten…” -Nick Cave- Cannibal Corpse recently came off a stint opening for Slayer on the […]

CONCERT REVIEW: They Might Be Giants at the Slowdown in Omaha

“If I have seen further than others, it is by standing upon the shoulders of giants” – Isaac Newton Their music has been described as kooky and quirky, but no matter how you label them, […]