The special concert for SiriusXM will feature KISS performing songs from the band’s 45-year career. This marks the first time KISS has played a club in over twenty years and will be their first performance at the world famous Whisky a Go Go in Los Angeles, the venerable rock club on the Sunset Strip that has played host to rock ‘n’ roll’s most important bands and artists, from The Doors, to Janis Joplin, to Led Zeppelin, as well as today’s emerging new artists. 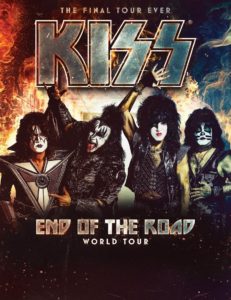 KISS’ performance at Whisky a Go Go will launch SiriusXM’s “The Party Continues,” a new live series that will feature music’s top artists performing in an intimate venue for SiriusXM subscribers following music’s biggest night at the Grammy Awards. KISS, in the midst of their END OF THE ROAD WORLD TOUR, kicks off the series at the historic Whisky a Go Go. “The Party Continues” joins a series of concerts established by SiriusXM at special and iconic venues across the country, including at the Apollo Theater in New York City, The Stephen Talkhouse in the Hamptons, the Faena Theater in Miami Beach and more.

The performance will air on Tuesday, February 12 at 5:00 pm ET on KISS Army Radio, channel 30, and through the SiriusXM app on smartphones and other connected devices, as well as online at siriusxm.com. The concert will air on Howard Stern’s Howard 101 channel on Friday, February 15 at 9:00pm ET.

KISS Army Radio will launch on Monday, February 4 at 5:00 pm ET via satellite on channel 30 and will run through Sunday, February 17.

After an epic and storied 45 year career that launched an era of rock n roll legends, KISS announced that they are hanging up their 9-inch tall touring boots. Known for their trademark larger-than-life blistering performances, KISS has proven for decades why they are hands down the most iconic live show in rock n roll.  The Rock & Roll Hall of Famers who have sold more than 100 million albums worldwide and have toured to nearly every city on the planet and played every venue imaginable have said this tour is devoted to the millions of KISS Army fans. Having played for Kings & Queens, for U.S. veterans, and for millions of devoted KISS Army fans, they will play their final shows as part of the multi-year END OF THE ROAD WORLD TOUR.

Subscribers will have the opportunity to win tickets to this private SiriusXM performance through an invitation sent by e-mail. Subscribers since January 2, 2019 will be able to enter for the chance to win a trip for two to Los Angeles, LA including airfare, hotel stay and a pair of tickets to SiriusXM Presents KISS at Whisky a Go Go. See Official Rules for complete details at siriusxm.com/KISS.

For more information on KISS’ “End Of The Road” Tour, visit www.kissonline.com/tour.

Zombeast Lights Up The Whisky on Samhain

BY MAURICE NUNEZ | Go Venue Magazine Tonight brought the haunting sounds of Zombeast to the world famous Whisky A Go Go in West Hollywood, California. Originally formed back in 2006, Zombeast hails from Phoenix/Flagstaff, Arizona. They ended up recording an […]

A bit of History Lower Class Brats are a punk rock band founded in Austin, Texas in 1995. One of their highly know influences is the movie/book A Clockwork Orange. You would think that seeing a […]