She’s just a devil woman with evil on her mind. Beware the devil woman, She’s gonna get you – Cliff Richard

The Admiral (formerly Sokol Auditorium) which recently reopened after an extensive makeover hosted a true rock show.  It was a stormy night on July 5th, 2022, but the thunder and real damage would come from inside the Admiral as Moodie Black and Puscifer set out to un-do all that stunning renovation. 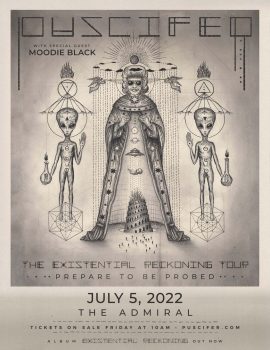 I like showing up early to shows as it gives me an opportunity to chat and visit with people. I introduced my self to the security officer who would be allowing me entrance to the pit.  It was at this time I learned that we would be allowed two songs from the pit and after Puscifer we would have to exit the venue and take our gear to our cars, then and only then would we be allowed to return to the festivities. I ran across a couple of other shooters, Adam and Spencer, and we shared stories and ideas. Any chance I get to chat with other photographers, I take advantage of it, as it’s a great way to learn.

Moodie Black got things going, and I mean THEY GOT THINGS GOING!!! I was a little familiar with these guys, buy HOLY FXXK, they are relentless live. They are able to combine many genres of music. The level of talent and ability it takes to do what they do is beyond belief.  Shoegaze, metal, noise and hardcore rap. Moodie Black basically created this style and as far as I know, nobody has been able to copy it. I really want you readers to learn about this band and it’s members. Please check out this article and watch a few videos. I promise you will be impressed. Once you’ve done this, be sure to go see them on July 15th at the Brokedown Palace, 8805 Maple St, Omaha.

We all know Maynard James Keenan and his band Tool, and I’m sure we know his project band Puscifer as well.

The set started off with a video about spam.  Yep, spam. What it is and how it’s made. What we didn’t know was that it was partially made up of people. Yes, you heard me right. But not just any people.  People who dare to take photos of Puscifer. These specific people get ground up and end up in the spam can.  It was during the 2nd song when some fella, looking like he just came out of the Beastie Boys Sabotage video, dared to take a photo.  Two stage security entities grabbed him and one of them hoisted the poor fella over his shoulders and as he kicked and screamed he was taken off-stage.  If I were you all, I wouldn’t eat any spam for a while. As for the music, classic synthesizer sound that brings you back to the 80s. There was plenty of chit-chat and some fun with the crowd. For example, Maynard pretended to not know what city he was in and had to be reminded by his counterpart, Corina Round. This was more than a rock show, it was rock/comedy. Their music continuously pulsates and if you’re not careful it will hypnotize you.

The entire evening was a performance. Everything from Aliens, MIB, politics and probing. When it was over, we had witnessed an interesting and thought-provoking show.

Big thank you to The Admiral and everyone affiliated with is event. Keep up the excellent work. Tremendous job to all.

The 12th annual Maha Festival — a multi-day, multi-faceted celebration of music and discovery in Omaha, Nebraska — is happening Wednesday through Saturday, August 5-8, 2020.  Wednesday’s events will span multiple venues along the South […]