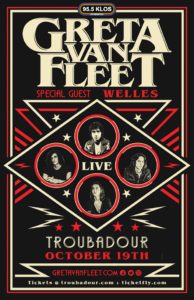 October 19, 2017 – The Troubadour is a very intimate place in the famous Santa Monica Blvd in West Hollywood. A perfect location for an intimate show. Greta Van Fleet is a rock ’n’ roll band that is getting bigger and bigger by the minute so catching their performance at the Troubadour was an amazing experience. Being very close to the stage you can really feel the energy between the GVF and their fans. Lead Vocalist Josh Kiszka definitely owned the stage, his high and positive attitude made his performance unforgettable. I would say that at one point during the performance of Black Smoke Rising I couldn’t help but think of Jim Morrison and what we were experiencing at that moment could have been compared to those who where able to experience the greatness of The Doors. Just witnessing this amazing band with a very successful musical career ahead of them, they are different, they are daring, they are rock ’n’ roll. In our generation we need bands like Greta Van Fleet. I did notice many concert goers were a bit older in age and that could probably be one of the reasons why GVF is very well accepted, they remind people of the good old days, not saying that there isn’t any good older bands out there but these guys have fresh new material and I feel that as a music lovers we really appreciate what these young guys bring to the table. The venue was completely packed, a sold out show, first and second floor flooded with fans. Singing along with every song and everyone’s face expression when Josh Kiszka hit those high notes was priceless. Sam Kiska (bass/keys) really got to show off his organ playing skills when they performed Flower Power his solo was mesmerizing. Jake Kiszka (guitar) also had his moment when he decided to play his guitar backwards! Yes backwards, that was surprisingly amazing to see. When Greta Van Fleet ended their performance the fans quickly chanted “one more song, one more song” no one wanted the show to end, we just can’t get enough of GVF they came back with one of my personal favorites Safari Song where once again we were witness to Josh’s vocal range. Danny Wagner (drums) didn’t stay behind, he also had his moment doing a superb drum solo ending the show with their hit song Highway Tune.

Opening Act
Welles is a rock band that to me felt a bit grunge. In early 2017 they released a single Are You Feeling Like Me along with its B-side Ashes. The vibe and mood they set was serene and ambient. Great guys making great music, full of energy and creativity. Can’t wait to hear more of Welles and see what they have ins tore for us in the future.

Travis Barker’s MUSINK, presented by KROQ, returns to the OC Fair & Event Center in Costa Mesa, CA Friday, March 8, Saturday March 9 and Sunday, March 10 for its 12th year as the premier festival bringing together the best of music, […]