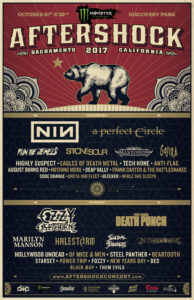 Aftershock has become the Northern California autumn go to for rockers of all ages, guaranteed to cater to the most purist of metalhead to your most laid back hippie. There is literally always at least one band that no one wants to miss, a few old favorites, a ton of new favorites, as well as a good bunch of up and coming bands. This year’s line-up didn’t disappoint, with A Perfect Circle and Nine Inch Nails headlining the Saturday and Five Finger Death Punch and Ozzy Osbourne the Sunday. Marilyn Manson was also supposed to make an appearance on Sunday but had to drop out due to an unfortunate injury on stage in NYC a few weeks prior. This didn’t seem to faze festival goers though: thousands of people attended Aftershock on both days, tiny babies to seasoned veterans, and everyone in between. I always love watching the huge array of people who attend a festival, all dressed up or dressed down, giddy with excitement about seeing their old or new favorite band for the first or the 20th time. I love watching people run from one stage to another, intent on squeezing as much time as possible out of each minute in order to get up front and center for each band. Aftershock really makes a great effort to cater to all needs too: food, fun, drinks, merch, and of course constant music.

Day 1:
Aftershock’s first day started off with Deap Vally’s sexy, bluesy rock, followed by Palaye Royal, Joyous Wolf, and the always energetic anti-flag, bringing the crowd together in unison against police brutality. New favorites Greta Van Fleet’s bus broke down on their way to the festival, leaving some mega-fans on tenterhooks as to whether they would make it or not. (They sure did, delivering a prime-time show as the sun dropped, Josh Kiszka’s powerful voice carrying far over the Capital Stage crowd). Around 1:30pm the Monster stage, dominating the main area of the festival, started to get crowded in anticipation for Nothing More’s performance. The band held up to the audience’s expectations by delivering a spectacular set, setting the tone for the rest of the day on that stage. Brooklynites Highly Suspect dominated the Blackcraft stage, with their second Aftershock appearance in less than three years, singer Johnny Stevens then riding a bike onto the Monster stage during the Eagles of Death Metal’s performance to give Jesse Hughes a mid-song hug. Aftershock then moved straight back into the heavier stuff with Gojira and Mastodon playing back to back sets, brutal riffs bouncing off the pure blue sky and subtly strong sunshine, Gojira’s drum beat pounding through the dusty ground up into your veins. Stone Sour got everyone super pumped up for Run The Jewels, an interesting choice for a rock festival, but one that made complete sense as soon as they launched into their first track, Talk To Me. The audience screamed for more at the end of their set, and rightfully so because they were seriously brilliant!! It was the perfect lead into two of my all-time favorites, A Perfect Circle and Nine Inch Nails. I last saw them play together 17 years ago so was super excited to see them again. I definitely wasn’t disappointed, ecstatic is probably a better word! A Perfect Circle treated us to a Maynard shrouded in darkness as he tends to be these days, and a career spanning set, ending with the first live performance of their most recent single, The Doomed. And NIN closed it out perfectly with 90 minutes of just under 30 years of music, tracks such as Something I Can Never Have, March of the Pigs, Head Like A Hole, as well as the first live tour rendition of Letting You. All in all a brilliant end to Day 1!

Day 2:
Them Evils kicked off Day 2 with their down and dirty Las Vegas rock, promising the earlier risers another day in rock n roll heaven. A slightly different crowd on Day 2, but just as hardcore as Day 1: mosh pits springing up all over the place, happy faces running from stage to stage, discovering bands like New Years Day, Black Map, and Ded early on, and rocking out to the scene stealers Starset as the sun started to pound down from above. I have a large soft spot for Suicidal Tendencies, as they were my 16 year old self’s go-to when I needed to get rid of some angst and anger, and they brought it all back again, storming the Blackcraft stage with their intensity. Even though I am a huge Marilyn Manson fan I can honestly say that the day was in no shape or form ruined by his absence – I actually even forgot that he was even supposed to be there! Hollywood Undead got everyone fired up and ready to go, and Mice and Men scored some huge metal points with their heavy set on the Monster stage. Maria Brink once again stole the show, blending her beautiful voice with a stunning visual circus. In This Moment just get better and better in my opinion, and if you can still catch them on their current tour you are in for a huge treat! Steel Panther played up to the audience over on the Capital Stage, their parody of the hair metal of days gone by a real sight for sore eyes (and ears). Halestorm brought their pure fire and energy to the Monster stage, getting the whole crowd to scream along with Lzzy Hale during fan favorites like Freak Like Me and I Am The Fire. And then for what was in my opinion the real highlight of Day 2 (and after NIN possibly of the whole weekend): Five Finger Death Punch over on the Blackcraft stage. While intensity reigned with metal anthems such as Got Your Six punching its way through the hyped-up crowd, acoustic renditions of songs such as Wrong Side of Heaven really displayed the band’s ability to touch as many people as possible. Ozzy then walked out onto the Monster stage to a happy, revved up crowd, asking the question that he already knew the answer to: “Are you ready to go fucking crazy??”. Smashing through old Sabbath favorites and solo hits like Bark at the Moon and Crazy Train, Ozzy gave us all a massive treat to end the two-day festival, one that many of us won’t be forgetting for a long time.