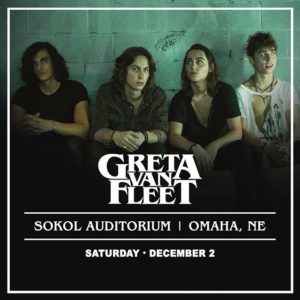 Saturday, December 2, 2017 – Sokol Auditorium puts on many shows every year, but this one was one of a kind. Originally scheduled at the much smaller The Waiting Room in Benson, tickets were flying off the shelves once they were on sale. It was because of 89.7 the River’s constant airplay of Greta Van Fleet’s hit single, “Highway Tune”, with their enigmatic sound of 1970s rock, reminiscent of Led Zeppelin. It was on a Saturday night, so it was obviously going to be a sold out show for these new comers to Omaha.

Opening up the show was Skyway Man from Nashville. They were quite interesting to watch. Very psychedelic. They also really loved to talk about UFOs. I did admire their musicianship, as every musician really brought it up there. Very experimental.  I did enjoy seeing Aaron Williams play the tenor saxophone on stage. They received a relatively warm welcome. You can check their new album released earlier this year called, Seen Comin’ From a Mighty Eye.

Finally, it was Greta Van Fleet’s turn to hit the stage. They are from Frankenmuth, MI; their sound encapsulates what Led Zeppelin was doing in the 1970s: bluesy hard rock. These kids are in their late teens/early 20s. Think about that. The music they played that night took me back to the 1970s, even having that 1970s look down. I couldn’t believe the sound coming out of Josh Kiszka’s, singer, voice. Such swagger and a force of nature. Bass and guitar duties of the band comprise of Josh’s brothers Sam, who also plays the keyboard in the band, reminiscent of John Paul Jones of Led Zeppelin, and Jake, who is also Josh’s twin, respectively. I was impressed on how tight they were live, never missing a beat, thanks to Danny Wagner’s drumming. The crowd was going nuts for these kids. I couldn’t believe it. You can check out their double EP that was released last month, From the Fires. To sell out Sokol is one thing if you have been in the scene for a while. Greta Van Fleet sold out Sokol and still haven’t released a full length album, having been on the scene for not even a full year. I will be looking forward to their next show here in Omaha, as they will definitely not be playing Sokol, moving onto a venue much bigger in size.

I hadn’t been gone to the Harrah’s Stir Cove Concert Series since mid-July of last year, until tonight I was there to see an awesome heavy metal lineup of the summer of 2017 featured Vince […]

A Sit Down with Sawyer Fredericks

BY JESS BECK | Go Venue Magazine 10/16/2019 – the Slowdown, Omaha, Nebraska Sawyer Fredericks is currently on a mini tour of the Midwest, stopping in Omaha, NE on his way through. Having won season […]

REVIEW BY DAVID TAYLOR and PHOTOS BY ROBERT A CHADWICK | Go Venue Magazine Classic rock band, Styx, came into Ralston Arena in Ralston, Nebraska, just south of Omaha, on Thursday, November 18. It was just an evening […]