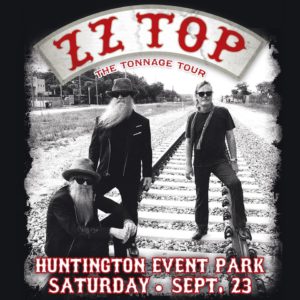 On a hot Fall night on September 23rd, 2017, thousands of rock n roll fans made way to the Huntington Event Park in Saginaw, Michigan to see Southern rock and blues icons ZZ Top live in concert.

Opening the show was The Summit, a band influenced no doubt by the headliners as they played blues rock.  I had never heard of The Summit and quickly they won the fans over with their charisma.  Lead singer Chris Scott lead the band with his soothing vocals and jammed on the harmonica time to time.  With fellow bandmates, Mike Hennel on drums, David Heffron on bass, Micah Hoosier on guitar and Chris Bentley on keyboards, this group has fun and it shows when they perform.  For those who like that swampy rock and roll style of music, check out The Summit, you won’t be disappointed.

The sun had set and the crowd was getting amped for ZZ Top.  Then suddenly drummer Frank Beard takes his place behind his tiki themed drum set.  Applause started up and then the crowd roared as bassist and keyboardist Dusty Hill and guitarist Billy Gibbons stepped on stage to the delight of the fans.

This is my third time seeing ZZ Top in the past three years and they’ve always put on a good show.  Churning out the hits from nearly fifty years together, I’ve yet to see them play “Thug”, but plenty of other fan favorites were doled out, “Sharp Dressed Man”, “Legs”, “La Grange” and “I’m Bad, I’m Nationwide” is just a scratch of the surface on what ZZ Top performed.  With personal touches on the song “My Head’s in Mississippi” was adjust for one lyric to My Head’s in Saginaw, Michigan.  To which the crowd cheered.

Billy talked about how ZZ Top had recently been touring Europe with Jeff Beck and that Beck commented that he plays rock songs, ZZ Top plays rock songs, let’s play some country.  So ZZ Top laid into some good ole fashioned country music.  With a little help from their touring stagehand, Elwood on steel guitar, they played the Buck Owens song, “Act Naturally”.

A couple other cover songs were done masterfully this night with Jimi Hendrix’s “Foxy Lady” and ending the show with an Elvis Presley song “Jailhouse Rock”.  The only complaint I would have is that the show wasn’t long enough, with so many other hits left unplayed, it leaves me with the feeling of wanting more.  So hopefully the next time I see them, maybe I’ll hear them play some of the other songs I dig by them.

It’s always great to see how music transports people back in time, as I looked around me seeing how the songs had many of the older members of the audience turning their older selves into the young lads of yesteryear and for those brief moments, their bodies move and groove to the beat.  Maybe the weed I was smelling now and then played a role in this, but music connects through time no matter how old you are, even with the beards of Dusty and Billy getting a little gray, they are and always will be the kings of blues rock.  Do yourself a favor and catch ZZ Top live in concert before times passes you by.  Reward yourself with having a goodtime.  Cheap sun glasses and sharp dressed, by the time you get home you’ll be a mess, but full of new memories of rocking out with rock and roll icons ZZ Top.

CONCERT REVIEW: Adelitas Way at The Machine Shop In Flint

Sometimes when you go to a concert, things just go right. On Saturday, April 7th 2018, The Machine Shop in Flint, Michigan was host to a sold-out show that featured Adelitas Way, Sons Of Texas […]

BY MIKE SHALER | Go Venue Magazine April 6th, 2019 The Machine Shop in Flint, Michigan hosted a fantastic night of rock and roll as L.A. Guns made a stop on their tour.  With Brent James […]