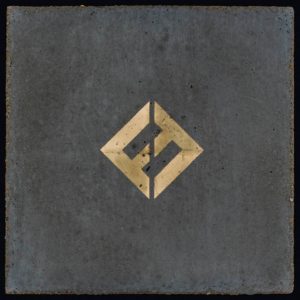 For everyone who has been waiting for the next installment of the Foo Fighters’ exploration of Rock and Roll, your wait is over and you will be rewarded. “The new album Concrete and Gold is their Magical Mystery Tour”, states Amy Sparks [Go Venue’s note: Ben’s wife]. They fine tune a variety of genres of rock, band members putting in their own touches. Producer Greg Kurstin (Pink, Adele, The Shins) wraps the songs in his own modern way, giving them a modern polish, making sure they don’t sound like a band trying to cover songs written by their idols.

Dave Grohl’s lyric skills come shining through, as they always have, moving the soul, pushing listeners to dance, shake fists, and cry. Take the time to read through Dave’s lyrics to truly appreciate his genius. There has been a lot of press about Rock bands staying out of the political sphere, but the Foo makes innuendos in La Dee Da, with

Look out ’cause you know what you’re doing
Turn up the American ruse
Whitehouse, Death in June
Jim Jones painting in a blue bedroom

The vocals are dialed in throughout the entire album. Each track has a surprise. Dave screams, serenades, growls and laughs in his own beautiful way. Taylor Hawkins’ vocals on Sunday Rain show the depth of skill the entire band brings to the table and gives listeners insight to how much creativity each band member shares in the end product.

Speaking of Taylor, his effect on Dave’s musical lens is huge. Listening to Concrete and Gold, you can almost imagine Dave and Taylor jamming out to Taylor’s personal music collection, bringing in a 70’s touch ala Pink Floyd and Queen. Tasty guitar licks jump out of history and land solidly in the majority of these new songs.

The one person that allows everyone to pursue these different paths is Nate Mendel, bass player. His rhythms lay the foundation for all the gold and concrete that flows off the album.

This is an album you MUST buy on vinyl. These guys are serious about their sound and the packaging. Don’t sell yourself short and download the media files.

You can put this album on the turntable with anyone in the room and have a great time, dancing, shakin’ your fists and asses.

It’s the long awaited return of the full-capacity arena rock show, as Foo Fighters and Madison Square Garden welcome fans back to the iconic venue on June 20, 2021 for the first 100% capacity concert in a […]

Rock & Roll Hall of Famers Foo Fighters will be giving the people even more of what they want. The band has added no less than 10 more evenings of life-affirming rock communion across the US and […]