On Friday, May 6, 2022, the duke of spook, Wednesday 13 and his ghoulish crew made their way to Los Angeles this evening by playing to a ‘Sold Out’ crowd at the world-famous Whisky A Go Go on the Sunset Strip. Due to the pandemic, the band had not been on the road for a couple of years. On this tour they are headlining the US playing a special career-spanning ’20 Years Of Fear’ set list. They have been on the road since late March and are wrapping it up with their last two shows in California, one of which was tonight in LA and Go Venue was there to cover it! 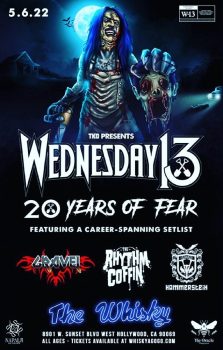 The place was packed as we got there just in time to catch Wednesday 13 hit the stage. The lights went down, and the eager crowd was ready. You would have thought it was Halloween out tonight as the Whisky was full of fans dressed in black and some even with ghoulish painted faces as they paid tribute to their rock god, Wednesday 13. For those not familiar with him, Wednesday 13 was the frontman of the Murderdolls and has also played in several other bands, including Maniac Spider Trash, Frankenstein Drag Queens from Planet 13, Bourbon Crow, and Gunfire 76.

Tonight they got their set started with “Scream Baby Scream.” From there they went right into a Murderdolls cover called “Chapel of Blood”. The place went wild as the band roared through their set, playing fan favorites like “I Want You… Dead,” “Cadaverous,” “Get Your Grave On,” “Serpent Society”, and “Decompose,” amongst others. At one point in between songs, Wednesday 13 told the crowd the story of how Joey Jordison of Slipknot called him up and wanted to start a band with him. That band would eventually be the Murderdolls. Tonight it was great to hear a couple of songs from the Murderdolls incorporated into the set as well as some songs from his other band, Frankenstein Drag Queens From Planet 13.

It was a lively, rocking set that had the audience moving all night. These guys definitely know how to have a good time while still keeping things spooky! Look forward to the next time they come to LA. See full photos and full set list below.

BY MAURICE NUNEZ | Go Venue Magazine Tonight Go Venue was on hand to cover The King at the Grove of Anaheim in Anaheim, California. King Diamond, known for his powerful and extensive vocal range, brought his Danish heavy metal to […]