ONLY 2017 PERFORMANCE IN THIS WORLD…OR ANY OTHER WORLD!!! With Special Guests To Be Announced! 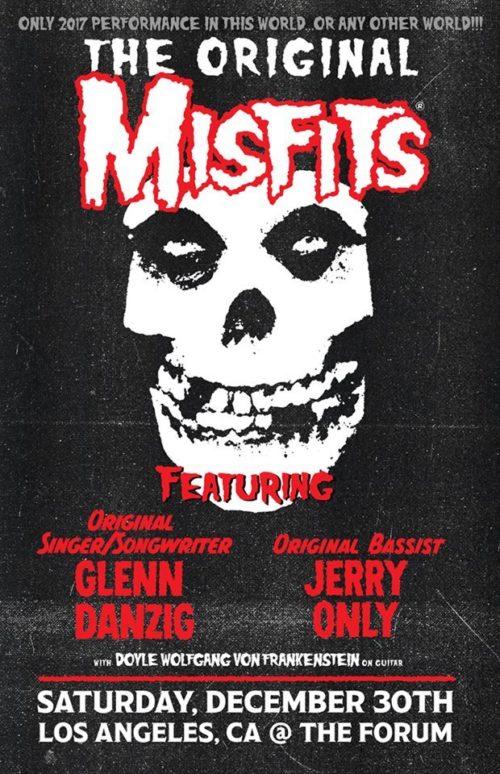 This December, on 12/30, Original Singer/Songwriter Glenn Danzig & Original Bassist Jerry Only joined by Guitarist Doyle Wolfgang von Frankenstein – for the First Time in Over 30 Years – will return to Los Angeles to reunite as The Original Misfits. Following their two historic reunion shows in 2016 at Riot Fest in Denver & Chicago that drew rabid fans in droves from all over the world and shattered attendance records at the festivals, this ‘One Night Only’ event will be the ‘Only’ 2017 performance in this world… or any world for the legendary horror-punk trailblazers. The band will be joined by special guests to be announced soon. “OK Los Angeles, you’ve waited almost 35 years for this, here’s your chance to see the “Original Misfits” in this Exclusive L.A. only performance.” said Glenn Danzig. “No Tour, No BS, just one night of dark metal-punk hardcore brutality that will go down in the history books. See you there.” Tickets for the reunion that never seemed possible, go on sale to the general public starting Friday, August 25th at 12:30pm local time at ticketmaster.com.  Jerry Only adds, “The Misfits were so far ahead of their time when we began back in 1977, that it took the world 40 years to catch up. That time has come, and that time is NOW… We intend to take you on a ride back in time, and into the future to experience 100% authentic punk rock at its essence, and the origin of thrash in its purist form. History will be made—again. Prepare to be devastated…” From the time of their first gig in 1977, the MISFITS and their iconic imagery went on to become one of the most crucially influential, genre-defying bands to ever emerge from North America. The MISFITS significance extends well beyond the narrowed path of punk rock, metal & hardcore. Although not cognizant of how significant they would become, what the Original MISFITS achieved in their initial seven-year window deconstructed and redefined rock music. The MISFITS with Danzig‘s anthemic songs and unmistakable voice, Only’s ferocious bass sound, and the Original MISFITS melody-induced choruses and authentically bruising musicianship, cemented their importance with all ensuing generations. And now legions of diehard fans from around the world will have the opportunity to hear the Original Band that forges a level of intensity unprecedented in the new millennium. Don’t miss this important chapter in the legendary band’s legacy of brutality.

GET TICKETS TO THE MISFITS AT THE FORUM!

CONCERT REVIEW: Calabrese with Zombeast and The Returners Tear Down The Slidebar

Words by Gloria Skulls and photos by Maurice Nunez Saturday, July 14, 2018 – Calabrese is an American rock band, based out of Phoenix, Arizona from 2033-present. The band consists of brothers Bobby Calabrese (guitar […]

The Original Misfits Heads to Madison Square Garden this October!

It was revealed last night on the venue’s outdoor screens that the reunited Misfits (with Danzig, Jerry, and Doyle) would be playing Madison Square Garden. The Original Misfits show happens on October 19, 2019 with very strong support comes from Rancid and The […]