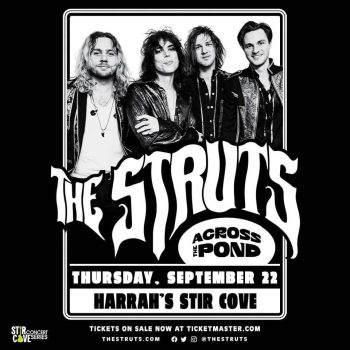 It was a chilly fall night on Thursday, September 22 when The Struts rolled into Council Bluffs, IA to play Stir Cove at Harrah’s Casino and Hotel. For these English dudes, who are always used to the cold, this was a typical Thursday. The last time they played in the Omaha metro area was when they headlined Sokol Auditorium in 2016, so this was an upgrade this time around.

The Haunt, an alt-rock quartet from South Florida, was the opener for the evening. Led by brother and sister, guitarist/vocalist Maxamillion Haunt and, lead singer, Anastasia Haunt, these guys didn’t give a damn what people thought of them and knew how to rock. I was very impressed with the band’s dynamic, with Anastasia’s incredible voice mixed in with Maxamillion’s harmonies and the heaviness brought by the rhythm section. And they won my heart by playing a rockin’ cover from one of my favorite bands, Royal Blood, of “Hook, Line & Sinker”. Get ready, folks, because the rise of Gen Z rockers is coming and taking the world by storm. I wish the best for these guys and hope they have a full-length album of new material coming soon.

Making their return to the metro area, The Struts were ready to melt some faces. People young and old showed up to see these multi-generation-appealing rockers. Regardless of attendance, this performance felt intimate, in the best way possible. The audience and band felt so connected to each other. Lead singer Luke Spiller, coming off a combined Foo Fighters-Queen supergroup performance of “We Will Rock You” at the Taylor Hawkins Tribute Concert in London earlier this month, continues to be one of the best frontmen out there touring right now. It was also amazing to see him tickle some ivories while playing the piano. What a talent! Guitarist Adam Slack guitar solo’d his ass off. He is an underrated player. Add in the incredible songs that the crowd sang along to, and you have a memorable night of live music. These guys are worth checking out at least once in your lifetime, either headlining or supporting. You’ll never have a bad time. Check out their latest single, “Fallin’ With Me.” I had a great run of shows this summer at Stir Cove. I am looking forward to seeing if 2023 can be even better.

System of A Down Receives A Big Welcome in Fresno

MAURICE NUNEZ | Go Venue Magazine Tonight, the 16th of October, Go Venue headed to the Save Mart Center in Fresno, California. The venue had hinted to be there early, and they were not kidding. […]

Nothing More Live in Omaha at The Admiral Theater

REVIEW BY DAVID TAYLOR AND PHOTOS BY PAM WHISENHUNT | Go Venue Magazine On Tuesday, October 18, 2022, Nothing More, Sleep Token, and Cherry Bombs rolled into Omaha, Nebraska to play the Admiral Theater on In This Moment’s Blood 1983 tour. […]