After a few delays, 89.7 the River’s River Riot 2021 finally happened on Saturday, August 14 at Westfair Amphitheater in Council Bluffs, Iowa. Though, there was a few lineup changes early on prior to the festival, many people still came to support both touring and local acts. 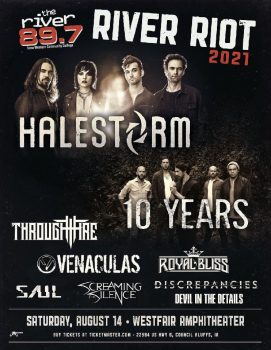 Devil In The Details, an Omaha metalcore act, opened up the festival with a bang! Lead vocalist Sean Thomas, donning a bulletproof vest, screamed his ass off onstage. Guitarist Aaron Koenig kept it heavy in his guitar playing. I guarantee they made some new fans on Saturday. Stay tuned to their social media, as they have plans for a new album and record release show in early 2022.

Next up was Discrepancies, a rap metal band from St. Louis. If I can recall, this was their first time they have played in the Omaha metro area. And the crowd was loving their blend of rap music and metalcore. Antonio Metcalf’s rapping was amazing, bringing something new to the table that isn’t typical. They brought so much energy to their live show. I know for sure this won’t be there last time here in Omaha/Council Bluffs.

Next up were local favorites Screaming For Silence. It was so nice seeing these guys live, again. My first time seeing these guys live was at Westfair at Rockfest in 2015, so it was bittersweet when I heard they were on the bill. These guys always bring it live and have a strong local fanbase that goes hard for them. There were many people that wore their merchandise at the festival. I do hope they head into the studio soon and record some new material.

Saul from Sioux City, Iowa was next. These guys have been blowing up around the country, getting radio play from all over. There is nothing like lead vocalist Blake Bedsaul’s dulcet tones, singing his heart out on stage. His brother, guitarist Zach Bedsaul, always gives 110% on stage, so much movement that man has. They are loved by many people around these parts, and that continued to show during their set. I wish them their continued success.

Royal Bliss from Salt Lake City, Utah were up next. These southern rockers, though kinda felt out of place on the bill, hit the stage hard and heavy. Very groovy and rhythmic. Catch them on tour with Fozzy and Through Fire (more on them later) in the fall!

Venaculas from Omaha hit the stage next. These local legends have been going on and off for over twenty years. I remember lead vocalist Phil Anson went up onstage with Arson City at Rockfest 2015 and was surprised by his primal energy. No difference here this time around. These guys were the heaviest band on the bill, and by a mile. It was nice seeing this band being a family affair with father Dave Hynek Sr. (who was in proud dad mode taking photos and video on his phone) trading off drums from his son Davey and his other son Jason on guitar. It was also cool seeing Chad Riche of Evandale (I hope they’ll be at the next 89.7 the River fest) onstage with them as well. The legends are true: they are one of the best Omaha bands, period.

Through Fire from Omaha, Nebraska, was up next. What more can I say about these guys. The only time I see these guys play are at these 89.7 the River festivals, and they always bring it. Always nice seeing guitarist Justin McCain’s family on side stage. He has a great support system. I’m always excited about their success. I still can’t believe this band has powered through from the Emphatic days to now.

10 Years was the direct support of the day. If I recall, their last rodeo at Westfair was in 2015 and what a fun set that was. 10 Years is a band that has a strong fanbase here in the metro area. And what a warm welcome they received. Lead singer Jesse Hasek is such an underrated singer. The voice coming out of this mouth is so angelic. The whole band was tight. Another amazing set from 10 Years. I wouldn’t mind if they came back to town.

Finally, it was Halestorm’s turn to hit the stage. And they ripped into hard, kicking off the speedy “Mayhem”. Fun fact: the last 89.7 the River festival they put on was Rockfest 2019 with Halestorm headlining, so when I heard they were headlining this year’s River Riot, I was ok with it. Because they are one of the best live bands around. Lead singer Lzzy Hale can do no wrong with her singing ability, always perfect. Guitarist Joe Hottinger shreds up and down the guitar. And the rhythm section of drummer Arejay Hale and bassist Josh Smith was tight as ever.

I still cannot believe that concerts are back. After being at Lollapalooza earlier this month, I kinda missed the simpleness of an 89.7 the River festival with their being one stage. I felt like I was back in my own backyard. Shout out to Sophia John, who was mention A LOT by all of the artists that were on the bill, Mammoth, and 89.7 the River for putting on this amazing festival. I look forward to the next one!

Devil In The Details

The daily band lineups have been announced for Rocklahoma, taking place on Friday, May 22, Saturday, May 23, and Sunday, May 24, 2020, at Pryor Creek Music Festival Grounds in Pryor, Oklahoma, located just outside of Tulsa. Now in its 14th year, the […]

UPCOMING FESTIVAL: In Bloom Music Festival In Houston on March 24 and 25, 2018