Elder Emos came from all over the valley to re-live some of the best memories they have with music on September 23, 2022. This Friday night in particular had several events going on throughout the Phoenix metro, but it was no secret that you could find the Millenials at the Marquee Theater in Tempe, AZ. Fishnets, band tees, and pastel hair flooded the theater to see some of the most iconic bands of the Emo era.

Originally slated to take place at Phoenix Raceway, this festival and staff handled a last minute venue change with ease. My guess is that with monsoon season in full swing, the weather couldn’t be trusted. On with the show! 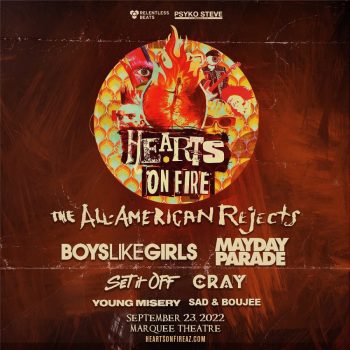 First up was Young Misery, a local band of guys who won the Light A Fire battle of the bands for the opening slot. Young Misery hails themselves as a post-hardcore band from Tempe, and they’re right on the money. I mean, ADTR vibes from their music, FOR SURE. Aesthetically, they’ve got their thing, and their thing is black skinny jeans and hair. Hair everywhere. You could tell these guys just really love what they do, and they were the perfect new name to open this nostalgia-fest. Check out their new EP, For Better or Worse, on Apple or Spotify; you won’t be disappointed.

After an impressively quick changeover, Cray took the stage. A solo act originally from Vancouver, Cray made her mark as an independent producer on her Twitch channel. Fast-forward to now, and she’s rocking stages with her poppy, singable anthems. Midway through her set she played a new song called “Mamma’s Boy” where during an instrumental break she demanded one thing from the audience. “Call your mom. Tonight.” (Sorry mom, it got late. I’ll call ya tomorrow.) Cray then wrapped up her set with Paramore-esque anthem Set Me Free, which had hundreds of scene-ior citizens jumping in unison.

Next up was Set It Off, and boy did they. I’ll be honest, I wasn’t expecting much out of these guys, since my last time seeing them left much to be desired. I won’t get in to all that here, but wow. W. O. W. The energy these dudes brought was insane. Singer Cody Carson had the crowd’s hands in the air within 10 seconds of taking the stage. And in the words of T-Pain, they stayed there. From the synchronized jumping interlude during Skeleton from their 2022 release “Elsewhere” to the sexy sax solo in Loose Cannon, Carson kept the room moving for the full 40 minutes. He made a subtle jab at the aging audience when he asked them all to get low “if you’ve got good knees” as if we needed a reminder that it’s not 2007 anymore and partying like a rock star doesn’t necessarily mean recovering like one. That’s the thing about millennials, though; we know we’re not young anymore, and we’ll be the first to call it out. Set It Off kept it coming though, surprising us with some Slim Shady vibes when Carson whipped out his rap skills. Overall, they put on a great show. If you haven’t seen them, or haven’t seen them in a few years, like me, GO SEE THEM. These guys have put in some work, and it shows.

Now it started getting really nostalgic. Mayday Parade was on stage after, and they brought a much-needed breather to the room. You could literally feel the gratitude from singer Derek Sanders as he was showered with cheers from the screaming crowd. Did Mayday Parade jump around and whip out crazy shenanigans? No. But they played all their hits that we didn’t remember we remembered, and it was a MOOD. There were tears, hugs, dancing, and I think someone even got engaged in the middle of one of their songs. You could tell who was there specifically for Mayday Parade, and that’s pretty cool.

Boys Like Girls took the stage after a long enough break for most concert goers to grab a drink or rest their feet for a bit. And it’s a good thing, because the band had the crowd hooked on every song, starting with their opener and hit Love Drunk. They followed that one up with Five Minutes To Midnight and Hero/Heroine, which you could barely hear over the deafening crowd singing back to them. Halfway through Heels Over Head, one concertgoer may have taken it too literally and needed to be carried out by security. She’s okay, though, and singer Martin Johnson stopped the song to allow security to help her up and get her checked out. Once she was good, BLG jumped right back in without missing a beat. By the end of their time on stage, fans were crowd-surfing, jumping, and taking turns sitting on each other’s shoulders. It’s safe to say that Boys Like Girls brought exactly the experience we’d all hoped for.

One more changeover and it was time for the almighty All-American Rejects. Aside from a few Gen Zers who didn’t know the dirty little secret, the venue was packed with excited 30-somethings ready to Swing Swing for another hour. Dressed in an orange, prison-like jumpsuit, singer Tyson Ritter took the stage with the rest of the band to deafening cheers and applause. The All-American Rejects were here. Ritter’s stage antics had a bit of a Freddy Mercury vibe, and the audience ate it up. A highlight for me was how tight the band sounded, and their on stage chemistry was simply impressive. Almost like it hasn’t been 20 years since they topped the charts. Rounding out their set with such hits as Dirty Little Secret, It Ends Tonight, and Move Along, AAR delivered. The audience had some demands, though. The encore chant was as relentless as the company that hosted the show. The chant soon morphed from “One more song” to “Gives You Hell”. AAR soon came back out to play the angsty anthem we all know and love, with hundreds of backup singers at the ready.

Shows like the Hearts On Fire Festival have been few and far between in the past, but here’s hoping to more going forward. Huge thanks to the Marquee Theater staff, all the bands, and especially Relentless Beats for making this night a huge success! Until next time, remember to be excellent to each other, and we’ll see you in the next mosh pit!

The 12th annual Rock On The Range returns to MAPFRE Stadium in Columbus, OH Friday, May 18, Saturday, May 19 and Sunday, May 20 with its most power-packed lineup to date. America’s largest and most […]

REVIEW BY DAVID TAYLOR and PHOTOS BY ROBERT A CHADWICK | Go Venue Magazine On May 20, Canadian pop punk rockers Sum 41 and Simple Plan brought their Blame Canada Tour to Stir Cove at […]

WHEN WE WERE YOUNG FESTIVAL Announces 2023 Lineup Featuring Blink-182, Green Day, 30 Seconds to Mars, The Offspring, Good Charlotte, 5 Seconds of Summer, All Time Low and Many More