40 years of Irish Punk! House of Blues in Anaheim, CA opened its doors on September 8th to many adoring fans and the Stiff Little Fingers to celebrate the bands 40th year anniversary in the music industry.

There was many concert-goers, a line formed outside the House of Blues with people from different paths of life, many punks as old as 60 and then some young ones from the younger generations. Kids as old as 3 attended the show with their parents. Everyone waited outside patiently to be let inside. Once the doors open some quickly made their way to the front rails to secure their spot for the night, they wanted to be front and center for the Belfast boys. Stiff Little Fingers are a punk rock band from Belfast, Northern Ireland. They formed in the early years of the punk movement, 1977. SLF went through some break ups in their musical career but once again reunited within the last few years and there is no stopping them now! The energy they brought to stage was over whelming with positive vibes between SLF and the crowd. They opened up with Wasted Life what a start to an unforgettable night. They performed many of their greatest hits there was never a dull moment, they kept the audience hyped and the mosh pit went on from beginning to end. Young and old rocking out together captivated by these Belfast boys. After performing When We Were Young lead singer Jake Burns took a quick moment to talk about the next song being written as a “Heart felt thank you to the late great Joe Strummer, when he passed away I was asked by numerous people to pay tribute to him, and the more I spoke about him the more I realized that talking just wasn’t enough, to pay proper tribute I was going to write him a song, so this is for Joe where ever you are, this is called Strummerville” The crowd clapped and cheered and the song began with much emotion in Jake’s voice it simply remarkable. SLF ended the show with Suspect Device a great anthem to end the night, but it only left the crowd asking for more, no one moved a muscle after the band left the stage, the crowd began to cheer “One more song! One more song!’ and SLF appeared back on stage for an encore performing 3 more songs! Starting with Johnny Was a more ska influenced tune that had the crowd dancing, then Gotta Getaway followed by Alternative Ulster one of their most recognizable song by SLF. A song about the repress youth in Ireland and the struggle it takes to break free. 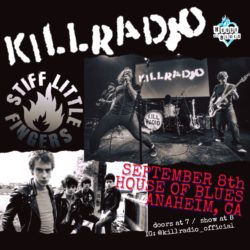 The first opening band Killradio a punk band formed around 2000 in Southern California by members Brandon Jordan, Todd Bonds and “The Duke” Sergio Reyes. The bands name came from the idea that radio programming had lost touch with its original purpose to give fans access to the musicians of their time. Killradio performance was enjoyable with lead vocalist Brandon Jordan showing his boss vocal range.

Second opening act belonged to Death By Unga Bunga. This Norwegian garage rock band released their debut studio album in 2010 titled Juvenile Jungle. After that three more full length albums and in recent 2016 an EP titled The Fight. Death By Unga Bunga is a band that I felt was really well put together in the meaning that these guys have great talent and an understanding of what clean music should sound like. Lead vocalist Sebastian Ulstad Olsen had a great interaction with the crowd jumping off stage and walking around the crowd singing and acting like a total badass.

Both opening acts where ear catchers for sure! Will be on the watchlist for these bands to come back and perform. As for Stiff Little Finger, its always a pleasure and honor to be able to witness the performance of such influential bands as this one in the punk movement. Catch them on their 40th anniversary tour, still kicking ass and still inspiring others to follow their dreams.

Dave Grohl, Nate Mendel, Chris Shiflett, Pat Smear and Rami Jaffee will come together with the Hawkins family to celebrate the life, music and love of their husband, father, brother and bandmate with The Taylor […]

Go Venue ends 2017 with Sweet and Ask Jonesy and Co. at The Whiskey A Go Go

2017 was a great year for Southern California, I had the opportunity of covering many of the hottest shows out here. Last show of the year was a perfect way to end it, Sweet and […]