Full disclosure: Since Go Venue has covered two dates [May 25, 2018 and May 17, 2019] on the final tour they weren’t be able to credential [photo pass] again, except credentialed David Taylor for the Omaha show review.

For almost 40 years, Slayer has been at the forefront of the American thrash metal scene, as part of the Big Four of thrash metal with Metallica, Megadeth, and Anthrax. But, on Monday, November 18, they played their final concert in Omaha, Nebraska at the CHI Health Center. It was a celebration of their music, full of pyro and fast tempos, a night to remember. 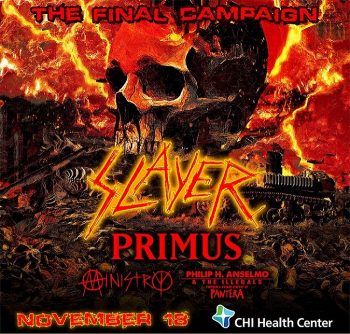 Phillip H. Anselmo, former lead vocalist of Pantera, and his band, the Illegals opened the show up. It has been nearly twenty years since Pantera has performed live, with their last ever tour had Slayer opening up for them. But, following the untimely deaths of guitarist Dimebag Darrell and his brother, drummer Vinnie Paul, Anselmo felt it was the right time to pay tribute to his former bandmates. This couldn’t have been a better opener. Seeing the crowd go crazy for an all-Pantera set in an arena was worth it, especially when everyone was singing along to “Walk”. Anselmo, though not sounding like he did in the 1990s, still sounded great. The Illegals were a tight band, paying tribute the right way. What a great start to the night!

Industrial rockers Ministry were up next. Led by Al Jourgensen, these guys kept the crowd going in a frenzy, playing classics such as “Stigmata”, “N.W.O.”, and “Jesus Built My Hotrod”. It would’ve been nice to see more of what was happening onstage, as it was a little too dark, but I was enjoying was what I was hearing.

The direct support of the night came from Primus. I had been looking forward to seeing Primus for awhile. Led by bassist Les Claypool, who has also composed the theme songs for South Park and Robot Chicken, this band was fun to watch. They showed their music videos behind them while playing the respective songs. It was also cool seeing Les playing an upright bass on “Mr. Krinkle”, donning a pig mask like the music video. They ended their set with “Jerry Was a Race Car Driver”, one of their signature tunes. Primus is such an enigma of a band. I’m glad Slayer chose them to be on this last tour.

Finally, it’s Slayer’s last performance in Omaha. The last time I saw them was at Stir Cove [in Council Bluffs, Iowa] in 2015. They thrashed through a twenty song set, spanning everything from “Show No Mercy” to “Repentless”. Kerry King and Gary Holt melted thousands of faces with their blistering guitar solos. Bassist/vocalist Tom Araya had never sounded any better. They really went out with the pyro budget on this tour, with fire coming from every direction. The crowd was enjoying every minute of it. I’m glad this was at the CHI Health Center in Omaha, as Lincoln has been getting the bigger rock shows, so it was a nice change. Hopefully, more heavy acts like Slayer will start to play this arena.

Phillip H. Anselmo and The Illegals

STYX And COLLECTIVE SOUL Celebrate Getting Back On The Road With Their First-Ever Multiple City Tour Together Starting June 18 In Alpharetta, GA

The long wait is finally over for STYX and COLLECTIVE SOUL fans, as both bands are rested, healthy and ready to hit the road for their first-ever multiple city tour together.   Tickets for various […]

BY JOE DeSANTI | Go Venue Magazine On Saturday night September 28, 2019, The Waiting Room Lounge and Reverb Lounge hosted the fourth annual Midwest Masquerade.  Both venues, located in the heart of the Benson area in Omaha, Nebraska, were connected by an […]

DEAN BIRKHEIMER | Go Venue Magazine On May 1st at The Waiting Room Lounge, Flux Amuck headlined what was an incredible night of hard-hitting rock and roll.  The cost of a ticket was $8.00, and […]