OLD SCHOOL IS IN SESSION 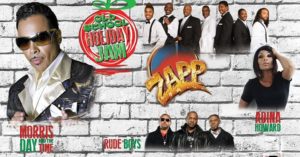 Saturday, December 16, 2017 – It was billed as an Old School Holiday Jam and it completely lived up to its billing.  As the crowd made its way to their seats, the DJ filled the arena with the sounds of The Commodores, Ohio Players and Kool and the Gang to name a few.  The first band to take the stage, were the Rude Boys.  Hailing originally from Cleveland Ohio this 90’s R&B vocal group and the soulful sound the provide was the perfect way to open this show. Songs like “Written All Over Your Face” and “Are You Lonely For Me” put everybody’s mind back to the 90’s and readied us for what was to come.  Next up was Adina Howard of “Freak Like Me” fame.  As the host of the show said, before there was Mary J. Blige and Nicki Minaj, there was Adina Howard.  Adina is still as beautiful as ever.  She carriers herself with complete confidence on stage and is not afraid to speak her mind.  This past April she released her fourth studio album, “Resurrection” and in November released a short tour film titled “Adina Howard: Resurrection Tour Atlanta”

I’m going to go ahead and call the next band the co-headliner of the evenings show.  Zapp or as they are also known, Zapp Band came out of Dayton, Ohio back in 1977.  Known for their use of the talk-box, they were instrumental in the electro funk sound.  It was hard keeping up with these fellas as they were all over the stage with some great dancing and choreography.  Often times, some completely leaving the stage for costume changes.  At one point they came out wearing giant afros and at another time came out in pimp clothing.  It was all very entertaining and the audience was very appreciative as they were dancing through-out their set.  We were showered in light and confetti at one point and it felt more like a dance party / sing-a-long then it did a concert.

The Time made their way to the stage, backs turned to the audience and the intro to Prince’s 1999 playing.  When Morris Day stepped out, the crowd went insane.  The show is full of music, showmanship and fun.  Everything from Morris Day looking in a mirror to comb his hair and a-la Fonzie, just admire what he sees and pocket the comb.  The synchronized movements across the stage are visually stunning.  Each artist is dressed to kill, looking smooth and clean.   The crowd could not get enough of this show. People were singing unabashedly and waving their hands non-stop.  The patrons especially love the part when Morris Day asked us if we’ve heard of Bruno Mars and then asked if we knew where he got is style  from?”  But all good things must come to an end however and this good thing ended with the great “Jungle Love”.  Morris Day & the Time’s funk and roll show is one you need to catch if ever given an opportunity.

Morris Day and The Time

BY DEAN BIRKHEIMER | Go Venue Magazine “Until you’re ready to look foolish, you’ll never have the possibility of being great” – CHER At a sold-out CHI Health Center on Tuesday, May 14, 2019, and […]

BY JOE DeSANTI | Go Venue Magazine On the tail end of the busiest shopping day of the year, Black Friday, Cirque Musica put on their Holiday Wishes show on November 29, 2019.  The Baxter […]

DEAN BIRKHEIMER | Go Venue Magazine When you can maintain your southern roots and still be punk and just for kicks throw in some blues, you can then be called The Black Lips. Formed in […]