“Other bands play, Rammstein burns!” This is a popular phrase that precedes any show that German metal band Rammstein plays, as they are known to bring one of the most spectacular pyro technique shows to any concert event. To the uninitiated, this might just sound like gloating and hype for a band. But once you get into the stadium, and Rammstein starts playing, you come to realize this is not just some loosely thrown around phrase. You have just entered an inferno. This was my experience when I finally had the opportunity to see Rammstein on night two, Saturday, September 24, 2022, of their back-to-back shows at the historic LA Memorial Coliseum. 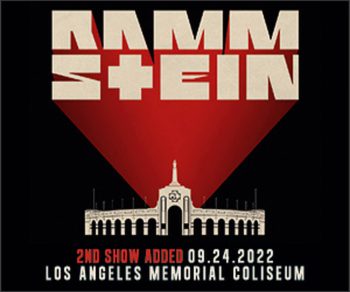 Opening the night was a pair of pianists known as Duo Játékok. Performing on a second stage setup in the middle of the crowd. They warmed up the audience with some beautiful instrumental arrangements of Rammstein songs as the sun set over the Coliseum. Playing songs like “Engel,” “Sonne,” “Puppe,” Ohne Diche,” and a few others. It was a beautiful way to say goodbye to the sun as we passed through dusk into the nighttime. Once the sun was gone and Duo Játékok had departed their stage, the crowd anxiously awaited the depravity that was about to commence.

Rammstein emerged and got things started with “Armee der Tristen.” Frontman Till Lindemann is a towering frontman with an intimidating voice that strikes both fear and excitement into the fans’ soul. Arguably considered one of the best frontman in heavy metal today, Lindemann brought a commanding presence to the stage. Lead guitarist Richard Kruspe is full of passion and exhilaration every time he strikes his chords. Though not really known for soloing, his lead riffs make Rammstein that more glorious. His partner-in-guitar Paul Landers sunk his teeth into the heavy licks and made them sound merciless. Landers and Kruspe are a destructive force that make Neue Deutsche Härte that pleasant. Bassist Oliver Riedel and drummer Christoph Schneider were booming with the blast beats. Keyboardist Christian “Flake” Lorenz was not lost on stage, as he was dressed as a human disco ball and marching in time to every song on his treadmill platform. No matter where you looked on stage, each band member was giving it their all and putting on a show for the screaming fans. Playing through songs like “Links 2-3-4,” “Zeig Dich,” “Zeit,” “Deutschland,” “Radio,” “Mein Herz brennt,” “Ich Will,” “Heirate mich,” and “Sonne” to name a few.

Something that makes a Rammstein show so unique, is their actual stage itself. This show could only be held in an outdoor stadium as Rammstein brought over 1,350 tons of stage equipment that when erected was 200 feet wide, 100 feet deep, and stood a chaotically 120 feet tall. The top of their stage potentially stood taller than the Coliseum itself, but once the pyro started firing off, the flames easily soared high into the sky. Not only was the stage itself rigged with numerous pyro canons shooting flames, there were also four additional silos stationed in the arena that were firing off flames throughout the show. But fire is not the only way Rammstein lights up their audience. The lighting rigs that are installed into the stage helped to cast the crowd into the red, glowing inferno when the fire wasn’t shooting off.

Not content with just letting the stage be the spectacle as the band plays their instruments, Rammstein becomes a theatre show with props, costumes, and unique fire rigs that the band can wear. With the song “Puppe” a 10ft tall steel baby carriage is brought out on stage and set to a flame while Lindemann pretends to almost set his arm on fire thought out the song. The band played an EDM remix of “Deutschland” where LED dancing stick figure men came out raving to the music. During “Mein Teil” a massive cauldron was rolled out as Lindemann donned a chef’s outfit. Keyboardist Lorenz was in the cauldron as Lindemann used a flamethrower in an attempt to boil him alive in the pot during the song. When it was time to rock out to the crowd favorite “Du Hast,” the stadium was set on fire as all the pyro canons were firing off nonstop. As the stadium went dark and the camera’s jumped from screaming fan to flashing the camera fan, this gave Rammstein the opportunity to travel to the second stage, where they were accompanied by Duo Játékok for a softer and more dramatic performance of the song “Engel.” Throwing life rafts over the crowd, the band members jumped into the rafts and the crowd sailed back to the stage. Upon hitting land, they moved into my personal favorite song, “Ausländer.” Followed by “Pussy,” where Lindemann fired a soapy jizz canon over the audience. Every fan happily bathed in the juices.

For the encore, the band started out with the song “Rammstein,” where Lindemann wore a fire backpack contraption that shot out nine separate streams of flames creating a massive fire peacock creature on stage. Guitarist Kruspe and Landers switched to guitars that had what looked like car mufflers attached to them but shot out 10+ foot long flames across their fret boards. I could only imagine how hot their guitars must be in those moments, but neither guitarist missed a note nor had an ounce of worry on their face. With the final song “Adieu,” it was Rammstein’s last moment to burn down the LA Coliseum, and that they did. Setting off every ounce of fuel they had left, the stadium was engulfed in pyro techniques and fireworks. As the fans continued to cheer and roar for the spectacle they just witnessed, every member of Rammstein came to the front of the stage to kneel to us. We may have had the privilege to see this band live, but the band had the honor to play their music for us, and they wanted to show us that respect.

There are many arena rock bands, and stadium shows that come through the United States every year, and each one has its own unique style, flair, and aspects to wow their audiences. But none of them can touch what Rammstein does for their fans. “Other bands play, Rammstein burns!” The phrase I had heard over an over again truly does signify just how amazing and special their show is. I, along with every single person in attendance that night, left with an amazing high on life from what we just experienced.

ON 12/30 ‘ALL HELL’S GONNA BREAK LOOSE’… THE ORIGINAL MISFITS REUNITE! Original Members – GLENN DANZIG and JERRY ONLY With long-time guitarist Doyle Wolfgang von Frankenstein ONLY 2017 PERFORMANCE IN THIS WORLD…OR ANY OTHER WORLD!!! […]

The Bourbon Theater and One Percent Productions Presents WOLF ALICE. Your Cure for the Monday Blues

REVIEW and PHOTOS BY DEAN BIRKHEIMER | Go Venue Magazine “In the calm, deep waters of the mind, the wolf waits.” – F.T. McKinstry On April 11th One Percent Productions and The Bourbon Theater brought […]