On Friday, July 22, glam metal band, Poison, returned to the Omaha metro area for the first time in ten years at Harrah’s Stir Cove. It was a very welcomed return and a hot night for live music! 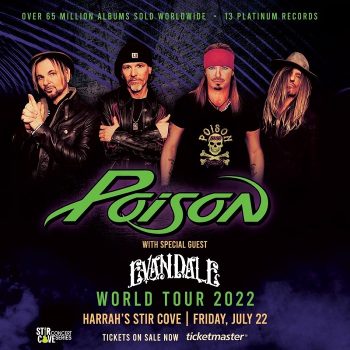 Evandale from Omaha, Nebraska opened the concert up. I believe this is one of the few rare times an opening act from Omaha has performed on the coveted Stir stage. I couldn’t have thought of a better opening act for Poison than these hard rockers. They brought their A-game, a group of talented musicians that know how to have a good time on stage. I could hear a combination of Steven Tyler and David Lee Roth’s wailing from lead vocalist Eddie Jay. The crowd response was very positive, knowing very well they made a plethora of new fans after their set was over. It is never a bad time when I see these guys live.

Lastly, the Pennsylvania-born and Los Angeles-based hard rock band, Poison, was ready to hit the stage. It is always a joy seeing a band with a nearly forty-year professional career still have their formative line-up intact. It gives a sense that these guys are brothers for the long run, through thick and thin. That was got from seeing these guys, a camaraderie with one another. Lead singer Bret Michaels has been a pop-cultural figure for most of my life, so seeing the hard-rocking side of him felt so natural with his bandmates. He felt truly grateful to still go out and perform, since the pandemic shut every live music act down. His energy was electric on stage and knew to command a crowd. I was also really impressed with C.C. DeVille’s guitar playing. Man, that guy can shred! He is definitely an underrated guitar player, in my book. It was basically the greatest hits set, which is not a bad thing. Everyone sang along to the songs, and it was a general good time, no pun intended. I think everyone deserves to see Poison at least once in their lifetime because they always bring it for their live performance for all ages.

All images © Robert A. Chadwick

CONCERT REVIEW: A Great Party with Joan Jett and the Blackhearts at Stir

BY DAVID TAYLOR | Go Venue Magazine On May 27, Joan Jett and the Blackhearts played Stir Cove at Harrah’s Casino in Council Bluffs. Joan Jett has been leading the charge of women in rock […]