You know that phrase, “New year, new me!”

Well…that’s kind of how it feels down here in Phoenix now that I’ve been here for about four months.

This was my first experience at the Crescent Ballroom on a warm summer Sunday where Wolves at the Gate, Rain City Drive, From Ashes To New, and Memphis May Fire came to heat up the evening a little more on July 24, 2022.

This was the perfect show for someone who’s favorite color is STROBE LIGHT.

Hardly a trace of deodorant anywhere.

Almost every vocalist was named “Matt” in one way or another. 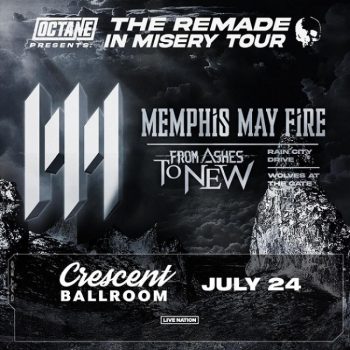 The stage at Crescent Ballroom almost seems like an afterthought, and I’ll explain what I mean. From the front, it looks like a normal café where you could get brunch and then go adopt a cat after you loaded up on too many mimosa’s. But then you walk through the black curtain in the back, and…and…there’s a stage? With bleachers for seating? I’m guessing this used to be a wedding venue at one point, but then the owners decided to do something more awesome with the space and they turned it into a concert hall. But despite the unconventional layout, the 600 human capacity venue does an amazing job of sound and lights, so I was pleasantly surprised!

I’ve also got some history with these bands, so get ready for some typical bullshit about memory lane (or whatever you want to call it) coming your way later on…

Kicking off the night was a band called Wolves at the Gate, a post-hardcore outfit coming all the way down from Ohio that I do NOT have history with, so for now you’re safe. I have to be honest, I wasn’t expecting what we all got from them that night. I was really impressed with their sound (not so much with their lighting, but that’s alright – I’ll take bad lighting and good sound ANY DAY rather than the other way around), and they were also a super cool bunch of humans. In a way, they sort of remind me of Christian hardcore band Demon Hunter with the mix of heavy drums, brutal screams, and a fantastic mix of clean vocals launched in at just the right moment in the music (their breakdowns are also pretty great, so I’d check ‘em out if you haven’t yet). Part of the way through their set, clean vocalist Steve Cobucci gave a little talk about conspiracy theories, and about how religion has been used as one for centuries to hurt people, misused by politicians to get funding for campaigns (wwwhhhhhaaaattttt??), and a host of other things, but he laid out his passion for the person of Jesus. And normally at a show like this, that would be a cringeworthy moment, but the way that he talked about it was genuine and received a positive response from the audience. It wasn’t an “alter call” by any means, but they did open the door for fans to have conversations about it with them at their merch booth after their set. Notable tracks for me included “Shadows,” “A Voice in the Violence,” and “Weight of Glory.”

Next up was Rain City Drive, and here’s where the history comes in! Aren’t you excited?!?

So, I caught these fellas a few years ago back when their name was “Slaves” and they had a different lead singer at the helm of the band who was eventually removed for…um…well…drugs are bad, mmmk? Anyway, I was really excited to see how they sounded with the “new” lineup (I say “new” because Matt McAndrew has been part of the band for a while now, but I haven’t had the chance to hear him live yet), and I think they did pretty well! My only real ‘criticism’ would be that Matt’s mic wasn’t turned up enough to hear him belt out the songs. But they kept the energy high, playing a few tracks from their 2021 release “Better Days” album and some from their new self-titled album which dropped just a few weeks ago and is certainly worth the listen. And, just like the last time I saw this group, I had to let the lead singer get a photo with me, so that happened too! Altogether through the lineup changes that this outfit has had, I’m impressed that they’ve been able to continue to hone their sound into what it is now. Notable tracks for me include “Talk to a Friend,” “Waiting on You,” and “Cutting it Close.”

After a brief set changeover and an amazing rendition of some Backstreet Boys, Spice Girls, and Whitney Houston by an amazingly tall, hilarious, bearded giant in the crowd (the changeover music was some of the best at any show I’ve been to down here by FAR), it was time for From Ashes To New to take their place on the stage.

Ok, so I covered FATN initially when they opened up for Skillet a few years back at the Sokol Auditorium in Omaha, NE, and they fucking blew my whole brains out.

This time was no different.

My brains were so scattered by how awesome their performance was that this article is actually being written by an alien pretending to be myself in this coffee shop in Phoenix.

But anyway, there were quite a few fans in attendance decked out in FATN gear, and you could tell right away that they were going to be a fan favorite – and they played this show like it was their last show on earth. Instantly the energy in the room was cranked up to 11 (I mean…where else are you supposed to go after 10?) as the Pennsylvania outfit delivered a blistering performance to the show-thirsty crowd.

Vocalists Danny Case and Matt Brandyberry moved in sync from one side of the stage to the other providing constant movement, fist bumps to the audience, and holding the mic out for fans to finish lyrics, which was awesome to see. They played their latest single “Heartache,” and Matt thanked the fans for listening to it as it was their most successful single release to date.

This band has been around for a decade at this point, and sure, they’ve had some lineup changes (as most bands do), but what sets them apart for me is how connected to their fans they are. They aren’t out here parading around as God’s gift to the musical community (here’s looking at you Kid Rock). They are friends on socials with TONS of their fans, and they’re so thankful for each and every person who gives them a listen. Matt went on later in the show to personally thank the audience for coming to hear them, and to tell them to normalize talking about mental health. He mentioned there have been a few times he’s thought about quitting the band, but the fans always pull him back in as he also wrestles with his mental health struggles. And for a band that sounds like if Papa Roach and P.O.D. had a baby, you can hear it in their music – it’s a present and persistent theme in their sound and lyrics. Other notable tracks for me included “Panic,” “Nothing,” and “My Fight.”

They’re also super cool humans. Both Danny and Matt had the chance to meet me after their set, and I told them both to their faces that they put on one hell of a show. It’s no wonder they’ve earned themselves over 1M monthly listeners on Spotify. Keep up the great work fellas – I’m personally excited to see what you do next!

Sirius XM Octane host (and new personal best friend) Jose Mangin came up and delivered a great introduction to Memphis May Fire, stating that Octane was his baby (he’s got the C-Section scar too if you need to see it), and he loves putting on shows like this because everything that Memphis May Fire does is certified on Octane as a BANGER. He also encouraged the fans to keep supporting shows – and he’s 100% right on that part. Without fan support, a lot of music that we enjoy today wouldn’t be here, so keep supporting your local bands, your local venues, and keep growing the community into a vibrant place where artists can grow. “We’re all family,” Mangin said. “The details might get muddled a bit, but at our core, we’re metal fans, and music is what brings us together. SO LET’S GGGOOOOOOO!”

And go we did!

Vocalist Matty Mullins put on one hell of a show for playing with several broken ribs, but he told the audience, “I might be a little more stationary tonight because of that, but I know you’ll pick up the pace for me!” I’ll say one thing – we all praise sportsball players for playing through an injury as they seem to have this “tougher than life” persona – but to have a vocalist who is willing to play through that kind of injury makes me convinced that he’s also an alien from another planet. I mean…I had a cracked rib a few years ago and I was barely able to get off my couch, let alone scream my heart out for over an hour to a sweat-soaked audience.

Mullins took several opportunities to thank the fans for rocking with the new album “Remade in Misery” and gave them permission to go home and steal the album because streams don’t pay for shit (that’s a separate gripe of mine that I share with Mullins, but I’ll write about that another time). But the whole show was a perfect production. You could hear every note, every syllable, and every delicious guitar and drum solo during the breakdowns. Some have made criticisms of the new album that it sounds too generic, boring, or whatever (here’s looking at you Kerrang), but hearing it live…it sounds like a masterpiece. And you’d be hard-pressed to find someone in the audience who didn’t connect with this production on a personal level (like the friend I made at the show who has seen them 9 times now).

In fact, the audience demanded an encore performance, which the band was happy to provide (hell, Danny Case even came out to sing on one the encore chants were so loud). All-in-all, it was what a metal show should be – packed, sweaty, respectful, and bringing broken people together with the power of music.

Big shout out to the Crescent Ballroom for taking care of business that night too. Their staff worked tirelessly to ensure the safety and enjoyment of the patrons, and not only that, they were super easy to work alongside of. While they don’t have a pit or a lot of space, this was easily in my top 3 venues that I’ve been able to work in down here in the Phoenix Metro so far, and I’m excited to continue to come back for more face-melting metal shows!

From Ashes to New

Wolves at the Gate

BY JESS BECK | Go Venue Magazine This show was kind of a special deal to me – and I know I say that about every show I shoot, but this one was a little […]

BY JESS BECK | Go Venue Magazine It was quite the impressive display of talent, hair, lights, and music on a blistering Wednesday evening on 07.20.2022 at the Ak-Chin Pavilion in Phoenix, AZ as Loverboy, Styx, and REO Speedwagon let their powers combine to bring us everything […]