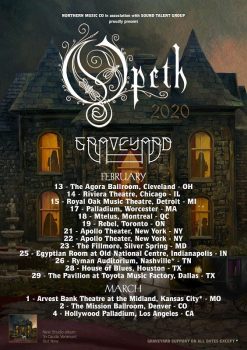 Opeth has been on tour in support of their album In Cauda Venenum. The tour started back in February in Cleveland and tonight they were concluding their last night in Los Angeles. As Opeth’s primary songwriter and lyricist, vocalist/guitarist Mikael Åkerfeldt heads the direction of Opeth’s sound. The Swedish based progressive metal band formed back in 1989 and have released 13 studio albums. Tonight they were in town in support their latest effort and Go Venue was on hand to cover it!

Things got started with another Swedish band, Graveyard. They are known for their hard rock psychedelic sound. The band took the stage around 8pm and got things started with “Walk On.” The four piece was able to quickly gain the crowds attention as they went into songs like “Hisingen Blues,” “Uncomfortably Numb,” “Please Don’t,” “Cold Love,” and “Hard Times Lovin” among others. They ended their set with “From A Hole in the Wall” and “The Siren.”

Next it was time for Opeth. By this time the Hollywood Palladium was packed. Tonight would be their last show of the tour and they couldn’t have chosen a better place to end this run. Opeth took the stage by 9:30pm to an eagerly awaiting crowd of fans. The lights dimmed for the intro then they got things started with “Svekets prins.” Their set covered a good portion of their discography and included fans favorites like “The Leper Affinity,” “Hjärtat vet vad handen gör,” “Reverie/Harlequin Forest,” “Moon Above, Sun Below,” and “To Rid the Disease.” A powerful set that had the audience enthralled with their music and stage setup which was composed of atmospheric lighting combined with video projections that enhanced the whole visual experience.

The night came to an end with “Soreress” and “Deliverance” for the encore. What a perfect way to end the night. Thanks to both Graveyard and Opeth for coming to Los Angeles on this tour. See photos and full set list below.

Tonight was the last night of what was a 6 show mini-tour of the Wax Trax’s film “INDUSTRIAL ACCIDENT: The Story Of Wax Trax! Records”.  This is the story behind the independent record store and […]

I was looking forward to this show. This one was ‘Sold Out’ and when I got there that was evident as the line was around the corner and down the block. This was an off […]

BY MAURICE NUNEZ | Go Venue Magazine Tonight Death Metal Masters, Nile, brought the house down at 1720 in Los Angeles on Tuesday, February 15, 2022. If you are not familiar with Nile, they are […]