LIFE OF AGONY is riding high off of the success of their critically acclaimed 2019 release, The Sound Of Scars (Napalm Records), and is teaming up with legendary Misfits guitarist Doyle for the “Beast Coast Monsters” US tour, beginning Friday the 13th of March in Philadelphia, PA and ending on May 25th at The Whisky in Los Angeles, CA. Special guests include All Hail The Yeti. See below for a full listing of dates and visit http://www.lifeofagony.com for more information.

In conjunction with the tour, LIFE OF AGONY has just released a new lyric video for their latest single “Stone”. LOA bassist Alan Robert says, “The reception to the new songs has been incredible and one of the cool things about ‘em is just how seamlessly they fit into the live set. We’ll definitely be breaking out “Stone” for the very first time on this upcoming “Beast Coast Monsters” tour!”

Watch and listen to the new lyric video for “Stone” below:

“Kickin’ off the tour on Friday the 13th seems absolutely perfect to me,” laughs Alan Robert.“After all, we’ve got the ultimate monsterman out with us! We really cannot wait to get back out there… we did a tour with Doyle last year in Europe and it was so much fun. Now we’ve got a great new set ready filled with fan favorites old and new, plus a few surprises up our sleeves.” 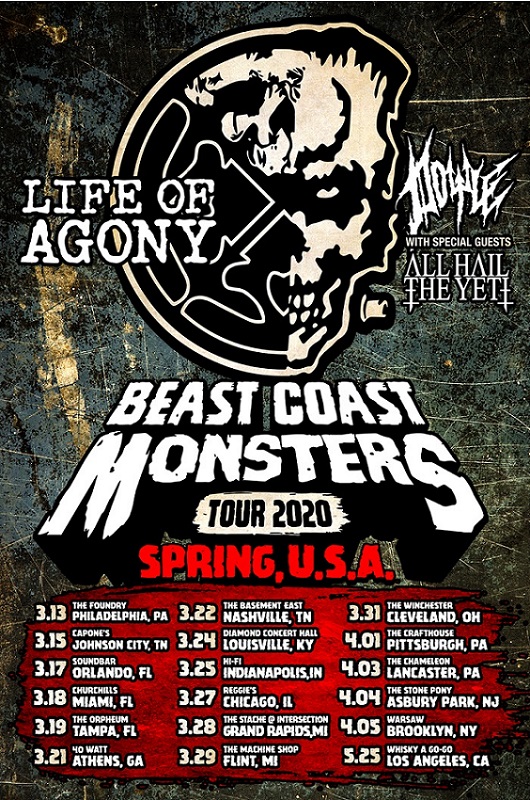 The Beast Coast Monsters tour also heads over to Australia for a handful of dates this May. That trip will mark the very first time LIFE OF AGONY will perform on Australian soil in their 30-year history. Later this summer, LOA will appear on several open-air festivals in Europe such as Hellfest and Alcatraz, as well as a string of co-headlining dates with Static-X.

LIFE OF AGONY’s The Sound Of Scars was named Album Of The Year by The Aquarian and took the #1 spot on Metal Hammer’s (DE) Alternative-Rock/Punk “Best of 2019” list. The record was produced by Sylvia Massy (Tool, System of A Down) with LOA’s very own Joey Z (mixed by Massy), and mastered by Howie Weinberg (Metallica, Nirvana).

Order LIFE OF AGONY’s The Sound of Scars HERE.

BEAST COAST MONSTERS US TOUR 2020:
Featuring LIFE OF AGONY, Doyle (of the Misfits) & All Hail The Yeti

Featuring LIFE OF AGONY & Doyle (of the Misfits)

Thrash/Death Metal band Deadechoes based out of Lincoln, Nebraska performed at the Lookout Lounge in Omaha, Nebraska on Wednesday, April 5, 2017, opened for Doyle with Phoenix’s Industrial/Metal band Element a440. Band Members: Rich Johnson: […]

ALBUM REVIEW BY MARISSA ANNE | Go Venue Magazine Doyle Wolfgang Von Frankenstein former guitarist of The Misfits and his crew are back with their second release. The follow up to Abominator with “Doyle II: As […]