A bit of History
Lower Class Brats are a punk rock band founded in Austin, Texas in 1995. One of their highly know influences is the movie/book A Clockwork Orange. 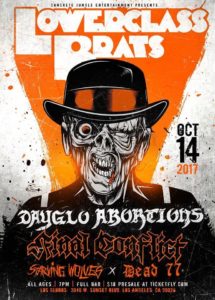 You would think that seeing a band perform over and over will eventually get old, but that’s not the case it is the total opposite, the excitement is new, the feeling is new and the crowd is always different. October 14th was no ordinary day in the punk scene community, everyone prepared for a night out with the Brats. It was a sold out show and the environment was welcoming. The stage was very close to the ground, no barricades so it was very up close and personal with the bands. Lower Class Brats hit the stage around 11:30 pm and performed for over an hour. These guys have energy for days! They began the show with Droog Stomp followed by Airwave Raid what a way to start the show. Vocalist Bones DeLarge is a highly energized individual that always makes Lower Class Brats shows extremely fun and entertaining with help from co-founding member Marty Volume (Lead Guitar) these guys are unstoppable. Ron Conflict (bass) from Final Conflict joined the LCB in 2012 adding bit of extra hardcore to the mix. Let’s not forget the two newer members of the Brats Nick Brat (drums, 2017) and Zed (rhythm guitar 2017) they did an outstanding job in the performance. Right after performing Who Writes Your Rules LCB decided to stop and talk a bit about an amazing artist that recently passed away, Tom Petty. Bones DeLarge said “Throughout this past couple years we’ve had a lot of people passed away, a lot of rock stars we all grew up with, we’re going to pay tribute to one of them now” Ron Conflict jumps in “So yeah we don’t know if you care but we do,Tom Petty was a big influence on us all, for a few of us he was like a gateway that leads us into getting into punk rock so this next song is for him, its a po-go song its called I Need To Know” everyone cheered and the mosh pit began. Lower Class Brats continued the night playing a lot of their hits like I’m A Mess dedicated to all the ladies in the crowd, thank you Bones we love that. The list of songs included Psycho, Shot Up Shot Down, Just Like Clockwork and ended the show with the aggressive anthem Ultra Violence one of my all-time favorites. Thank you Lower Class Brats for an amazing show. See you in the next one.

Dayglo Abortions are a Canadian punk band formed in 1979 they are a very outspoken band lyrically and with their album art resulting in obscenity charges in the late 80’s. But isn’t that what this lifestyle is about? To express one’s self in any way we please? Dayglo Abortions were amazing that night a great opener for LCB. They revved up the crowd and had everyone singing along to their lyrics and the mosh pit going none stop. Their music keeping that old school sounds very present and making us feel very much alive.

Final Conflict is a hardcore punk band from the beautiful Long Beach, CA formed in 1983. Final Conflict is regarded as one of the first extreme hardcore punk bands from Los Angeles County area. They incorporated a British-style hardcore punk rock at a time when the punk scene was at its weakest point. Final Conflict managed to stay relevant and active in the scene for all these years, touring and releasing new material. Ron Conflict on vocals had a double shift that night he is also a key member in the Lower Class Brats. From their performance, you can definitely say that they know what the crowd wants and they are not afraid to deliver. Their style is very raw and in your face, no sugar coating for these guys. The crowd gathered around quickly to join the pit, many were falling but that didn’t stop them, they would get up and rejoin the rest of the fans in the twirling cycle of fists and legs kicking and punching without a care. Definitely looking forward to more of Final Conflict.

Starving Wolves was a good band very involved with the crowd, a bit too politically involved for my taste. If I go out to a punk show, I want to hear music and stories from the band, I don’t want to spend my night listening to something I can watch on TV. It’s perfectly fine to speak about whatever you want but I feel like the show shouldn’t consist of just that. Other than that Starving Wolves are very talented and I sincerely wish them the best in their musical career.

Dead 77 is a Los Angeles based band fairly new and they are ready to take your attention. Their sound was very street/hardcore from the 80’s and maybe 90’s. Another band that is not afraid to show us what they are made of. I want to see more and know more of who Dead 77 is. wish them the best and hope to catch them again sometime soon.

Concrete Jungle Entertainment always brings us the best in music shows. They do great things to keep the music alive and the community involved.