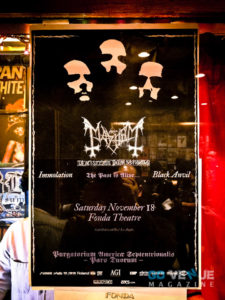 An evening of Mayhem came down upon The Fonda Theatre in Hollywood, CA this past Saturday night [November 18, 2017]. This was the return of the Black Metal masters from Norway. I had seen them in the past when they toured a couple of years back with Watain. This time they were back and headlining from what appeared to be a sold out show.

This evening got started with the opening act, Black Anvil. This was my first time I had seen them. They got the crowd of going as they played an aggressive 35 minutes set of Black Metal. They are from NY, but the LA crowd greeted as one of their own. A great way to start the night. Next up was the band Immolation. By now the venue was getting nice and packed. These guys put on a heavy Death Metal set. This was also my first time seeing Immolation, and they delivered. They had dedicated “Swarm of Terror” to Black Anvil and Mayhem. The crowd went nuts, which was perfect to get the crowd ready for Mayhem. 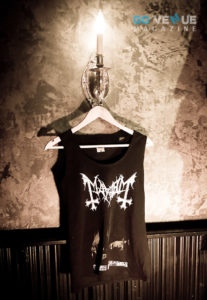 Next it was time for the headliner. This time Mayhem was here to play their 1994 album “De Mysteriis Dom Sathana” in its entirety. Once they came out all the lights went out and it was pitch black. Once the band came on stage it was loud and fog covered the entire stage. I couldn’t see a the photographers next to me. It felt like I was going into a deep forest where I was going to be greeted by pure evil. The band emerged in their evil dark hoods and the entire venue was ready to worship the darkness of what is Mayhem.

The band remained shrouded in darkness and silhouetted against the blue lights for most of the show. Despite the fact that the band members were nearly indiscernible black shapes moving about the stage, the crowd was intense with the mosh pit was in full motion. Attila (the singer) commanded the stage and worked the audience like only he can. Simultaneously a portrait of depraved insanity, and a fearsome larger-than-life figure commanding unwavering attention from the spectators. He utterly loses himself in the performance and transforms into something nearly otherworldly, at times seeming possessed and not fully in control of himself. Attila’s presence on stage is unlike any other. 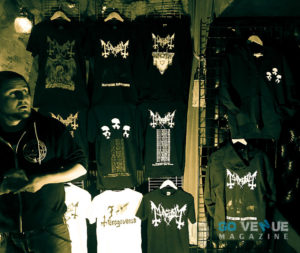 Their set concluded, the band unceremoniously left the stage as the lights brightened. No encores and LA was left scarred with the black metal mark from the Norwegian gods. Even Glenn Danzig was in the house for this event and watched the show from side stage. What an evening…

CONCERT REVIEW: Calabrese with Zombeast and The Returners Tear Down The Slidebar

Words by Gloria Skulls and photos by Maurice Nunez Saturday, July 14, 2018 – Calabrese is an American rock band, based out of Phoenix, Arizona from 2033-present. The band consists of brothers Bobby Calabrese (guitar […]

BY MAURICE NUNEZ | Go Venue Magazine Tonight Death Metal Masters, Nile, brought the house down at 1720 in Los Angeles on Tuesday, February 15, 2022. If you are not familiar with Nile, they are […]

CONCERT REVIEW: Windhand at The Roxy in Los Angeles

Monday, April 23, 2018 – Last time Windhand, a doom metal band based out of Virginia, was in Los Angeles, they played the Roxy. They were back at the The Roxy Theatre this time around. It […]