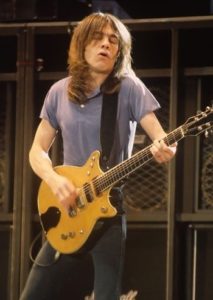 1990’s “Thunderstruck” bows at No. 6 on Hot Rock Songs (which, like the all-genre Billboard Hot 100, allows older songs to chart if in the top half of the ranking and have a significant new reason behind multi-metric gains). The track debuts with 6,000 downloads sold (up 73 percent) and 4.1 million U.S. streams (up 33 percent) in the week ending Nov. 23, according to Nielsen Music. It rises 4-3 on Hard Rock Digital Song Sales and re-enters Rock Streaming Songs at No. 9, marking just the third week that AC/DC has appeared on the latter chart.

AC/DC’s five other titles on Hot Rock Songs this week:

Young died Nov. 18 at age 64 in Elizabeth Bay, Sydney, Australia. He had been receiving treatment for dementia since April 2014, which resulted in his retirement from AC/DC later that year. His nephew, Stevie Young, replaced him in the band.

AC/DC: ‘Back In Black’ Anniversary Edition

CHRIS STROUD | Go Venue Magazine So, I was asked to do a review on AC/DC‘s ‘Back in Black’ in honor (for want of a better term) of the album’s 40th Anniversary.  It’s strange to […]

A retrospective look at the iconic album from AC/DC. A magnificent album that shot the group from rising credibility to supergroup and into rock legend status. Highway To Hell BY STEVE WALKER | Go Venue […]

Without question, AC/DC are one of the greatest rock bands in history. Their mammoth power chord roar became one of the most influential hard rock sounds of the ’70s and is synonymous to rock culture […]