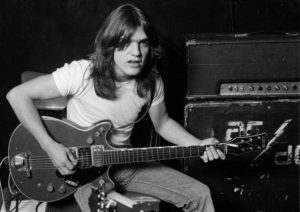 The legendary guitarist passed away surrounded by family, following a long battle with dementia.

He was born on January 6, 1953 in Glasgow, Scotland, Young was best know for being the driving force behind the hard rock band.

Along with his younger brother Angus, he wrote the band’s material and came up with many of their biggest and best guitar riffs.

In April 2014 it was announced that he would take a temporary leave of absence to receive treatment for dementia, before retiring permanently in September that same year.

He was replaced by his nephew Stevie for the band’s last tour promoting the 2014 album Rock Or Bust, with his blessing.
He is survived by his wife O’Linda and two children.
RIP Malcolm.

Without question, AC/DC are one of the greatest rock bands in history. Their mammoth power chord roar became one of the most influential hard rock sounds of the ’70s and is synonymous to rock culture […]

By Jason Perry | Go Venue Magazine …and the band played on.   It’s nothing short of miraculous that legendary hard rockers AC/DC were able to record their most recent album, the stunningly fresh-sounding Power Up, at all. The […]