Last year we reviewed Mortiis when he came to Los Angeles. It was such a powerful performance that Go Venue was excited to catch him again this time around. If you are not familiar with the man behind Mortiis, let me give you a brief history. Mortiis is the solo project of Håvard Ellefsen who hails from Norway. The undisputed inventor of dungeon synth, Mortiis, just unleashed new music unto the world in form of a release entitled “Spirit Of Rebellion” – a re-interpreted expansion and continuation of the 1994 Era I classic “Ånden som Gjorde Opprør”.  The album was just released on January 24th by Dead Seed Productions and is available on CD, Download, and limited versions on Cassette and Vinyl.  The music was recorded and mixed by the man himself in various locations throughout Norway and Sweden back in the summer-fall of 2017. It was then re-mixed again in early 2019.

Mortiis comments…
“I had to fend off a lot of demons to get to this point. They’ll be back, they always come back, but at least my vision is no longer clouded…When I was working on re-interpreting my old music for the Cold Meat Industry festival in Stockholm almost two years ago, I had no idea that I´d eventually create an (almost) new record, nor that a section of it would be used for my first Dungeon Synth video since 1996. But here we are.” 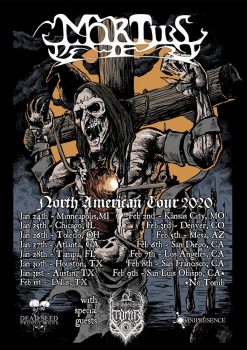 Tonight – February 7, 2020, Los Angeles had the privilege to see him perform this album again, but this time it was at the venue Catch One. Mortiis took the stage around 11pm to full house. The stage setup included his keyboard synthesizer, a lighted backdrop, leafless forest trees, and tribal drums which were used during the 2nd half of the set. He played the entire new album which consists of two songs, but those songs have different parts to them, so it makes for about an hour long set of atmospheric dungeon synthesizer music. His set blew me away once again. Such timeless sounds and such a dark presence, but makes you feel at ease as his music takes you on a journey through his creativeness and artistry.  No one plays the synthesizer like he can. No wonder he is known as the ultimate creator of dungeon synth.

Once his set was over, I was honored to have the chance to meet Mortiis backstage and took a photo for our review. For this round of shows, Mortiis selected 15 cities starting January 24th in Minneapolis, MN and ends in mid-February in San Luis Obispo, CA. His new album, “Spirit of Rebellion,” can be purchased HERE. Definitely worth a listen and if you ever have the chance to see him perform live, I highly recommend it. Thank you to Mortiis for the most memorable evening and hope to see him back again soon!

See photos from tonight’s even below.

Sunday, April 29, 2018 – Electric Wizard, an English doom metal band, were in Los Angeles tonight and headlining the Wiltern Theater. I was familiar with their music and have only heard great things about […]