Tonight, Machine Head was in town at the House of Blues in Anaheim. For those of you who are not familiar with Machine Head, they are a metal band from the Oakland area that was formed back in 1991. They are known as pioneers of American heavy metal and recognized as one of the top thrash bands from the 1990s. The current lineup consists of vocalist/guitarist Robb Flynn, bassist Jared MacMachern, guitarist Wacław Kiełtyka, and drummer Matt Alston. As part of their current tour, they are also celebrating the 25th anniversary of their album ‘Burn My Eyes’ with drummer Chris Kontos and Logan Mader joining Robb and Jared on stage to play this album in its entirety. This was going to be an epic night and Go Venue was there to cover it! 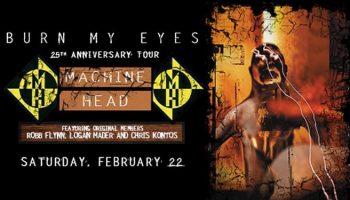 We arrived at the venue early and looked to see what time the opening bands were hitting the stage. That was not the case. Tonight, there would be no openers. The evening was dedicated to the one and only Machine Head.  The show was to start at 8 pm promptly.  This was the last night of the tour, so Anaheim was in for a special treat. Right before the band hit the stage Ozzy Osbourne’s “Dairy of a Madman” was playing through the sound system when all of a sudden, the band took the stage and got things started with the brutal sounds of “Imperium.” The metal fans were ready as almost instantly the moshing and headbanging commenced.

Machine Head went on to play a two-hour set which consisted of fan favorites like “Take My Scars,” “Now We Die,” “Beautiful Mourning,” “Aesthetics of Hate,” and “Darkness Within” among others. The crowd went wild here as the mosh pit never relented. If anything, it only got bigger and bigger as frontman Robb Flynn encouraged moshing throughout the show. They concluded the first part of their set with an Iron Maiden cover, “Hallowed Be Thy Name” followed by “Halo”.  After this set, the band took a ten-minute break before they would come back and play their debut studio release, “Burn My Eyes,” in its entirety.

After a blistering two hour set of pure metal, the band came back with leader/vocalist Robb Flynn on guitar and Jared MacMachern on bass, and this time they had their original guitarist Logan Mader and original drummer Chris Kontos joining them on stage. For the 2nd set, Machine Head played their debut album “Burn My Eyes” starting off with “Davidian.”  They ripped through their set and even included some Metallica, Exodus, Accept, and White Zombie covers. The fans could not get enough as the circle pit kept moving with aggression while others kept headbanging the entire night. This was probably the largest pit we’d ever seen here at the House of Blues. The evening concluded with “Block,” which was an incredible way to end the night’s festivities. Tonight was 3 hours of nonstop metal in your face, Machine Head style.

We thank Robb Flynn and crew for bringing an intense set of metal to Anaheim. We look forward to their return!

See photos and both set-lists below.

Imperium | Take My Scars | Now We Die | Beautiful Mourning | Locust | I Am Hell (Sonata in C#) | Aesthetics of Hate | Guitar Solo | Darkness Within | Catharsis | From This Day | Ten Ton Hammer | Is There Anybody Out There? | Hallowed Be Thy Name (Iron Maiden cover) | Halo

Burn My Eyes set:
Davidian | Old | A Thousand Lies | None but My Own | Drum Solo | The Rage to Overcome | Death Church | A Nation on Fire | Blood for Blood | I’m Your God Now | Welcome Home (Sanitarium) / One / Motorbreath / Strike of the Beast / Thunder Kiss ’65 / South of Heaven / Raining Blood | Block

BY MAURICE NUNEZ | Go Venue Magazine Last time Cradle of Filth was in town they played in Hollywood, California. This time around they came to the House of Blues in Anaheim. The band is […]

Slayer guitarist Gary Holt has announced that he is leaving the European leg of the band’s farewell tour to be with his ill father. “My father is very near the end of his journey,” he […]