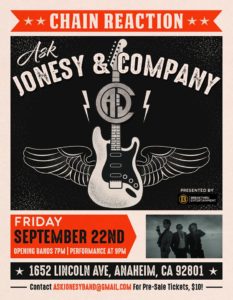 Ask Jonesy & Company is a new rock ’n’ roll band based in Los Angeles, California. The band is fronted by the trio, Troy Romzek (lead vocals/guitar), Leo Howard (lead guitar/vocals) & Ricky Ficarelli (bass/vocals). Alongside their backing band, which they call “The Company”, this band aims to create an authentically revolutionary sound that drops all rock ’n’ roll boundaries. Their unique sound can be comparable to Lenny Kravitz and Hendrix, making it undeniably delightful. With the help of a saxophone player this band is by far one of the best new bands I have heard by far in Southern California. I had the opportunity to check out Ask Jones & Co. Sep. 22nd at Chain Reaction in Anaheim, CA. The soulfulness and funk these young guys brought to the stage was mesmerizing. I can feel the energy and positive vibe these guys had when they stepped on stage, they joked for a quick second and got right to it opening with Morocco By Midnight. It was truly a sight to see how synchronized the band was with each other, totally makes the experience so much more worth it and enjoyable. Lead vocalist Troy Romzek did not hold back! He’s powerful raspy voice convinced me that they mean business. His interaction with the crowd had the ladies going crazy, he demanded attention and he got it. There was also a pit going which showed that the guys where digging the music as well. The show was extremely entertaining, every song was different and unique funky tunes and soulful vocals is exactly with my Friday night in California needed. Towards the end of the show these guys where rocking out so hard that bass player Ricky Ficarelli ripped his finger open but he didn’t let that stop him. Performing with a bloody finger doesn’t get any more real than that. One of my favorite songs of the night had to be Red & Blue each one of the trio got to show off their skills and the crowd loved it, from Leo Howard’s funky solo to Troy’s power sultry growls.
I very much enjoyed seeing these band, I hope to catch them again in the future. I wish them well in their musical career because their music is exactly with the younger generation needs. A band with attitude, soul and pure Rock ’n’ Roll.
-Gloria Skulls

Wednesday 13 Live at The Whisky

BY MAURICE NUNEZ | Go Venue Magazine On Friday, May 6, 2022, the duke of spook, Wednesday 13 and his ghoulish crew made their way to Los Angeles this evening by playing to a ‘Sold […]

CONCERT REVIEW: EVERCLEAR At Ace of Spades in Sacramento, June 27, 2018

Local H- They have a hard hitting alternative rock sound. They make you feel like you’re in high school again at a Friday night house party with an awesome local band. They rock all night […]