The women of emerging Brazilian thrash trio NERVOSA have set their sights on North America! The band is confirmed to support heavy metal headliners AMORPHIS on their upcoming tour, kicking off on September 11, 2020 in Brooklyn, NY for one of three nights at Kingsland before touring all throughout North America. The tour will continue for nearly a month and a half, coming to an end in Hartford, CT on October 25, and will also feature additional support from ENTOMBED AD. See below for all confirmed tour dates.

This is NERVOSA’s first tour of North America since the release of their most recent album, Downfall of Mankind! Tickets are on sale now via individual venues.

Guitarist Prika Amaral says: “It will be amazing to be back in the USA and Canada, mainly with our friends from ENTOMBED AD. It is surely an honor to be a part of the AMORPHIS 30 Year Anniversary Tour. No doubt this tour will be unforgettable.” 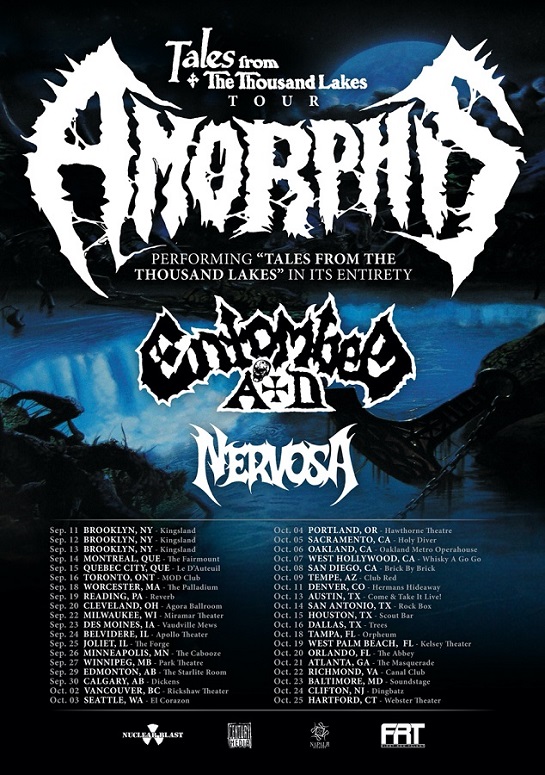 NERVOSA is synonymous with raw aggression and untamed power – a massive punch right in the face both live and immortalized on two records so far! For their third and most recent album, Downfall of Mankind, the trio joined forces with producer Martin Furia who previously worked with DESTRUCTION, FLOTSAM & JETSAM and EVIL INVADERS and also toured with NERVOSA as a sound engineer. The result perfectly captures the live energy and the old school character that defines the band without neglecting the strengths of a modern, compact soundscape. Riff-fests like “Vultures” and “Kill the Silence” grab the listener by the throat and succeed with a straight-ahead stomp and economical arrangements. It comes as no surprise genre legends such as João Gordo (RATOS DE PORÃO), Rodrigo Oliveira (KORZUS) and Michael Gilbert (FLOTSAM & JETSAM) were thrilled to be studio guests!

Watch the band’s most recent video for “Raise Your Fist” below:

On June 1st NERVOSA will deliver their second blistering slab of metal on Napalm Records.  Get ready for the Downfall of Mankind. This Brazilian all-female thrash commando unit is synonymous with raw aggression and untamed […]