Tonight the Devastation On The Nation North American Tour 2019 made it’s way to Los Angeles. In fact, this show was Sold Out before the tour even started. The tour started back on May 17, 2019 in San Diego, CA, but prior to that the band did an in store guest appearance at Grill ‘Em All in Alhambra, CA. I had the opportunity to cover this event for Go Venue Magazine. Great bunch of guys who signed and met all the fans who were standing in line. They must have signed for over 3 hours straight until each and every fan had the opportunity to meet the band. 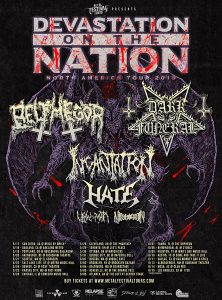 Now they were back in Los Angeles to finish off their North American tour at 1720. I had never been to this venue previously. It was not in the greatest neighborhood. Once I was inside, I found some friends who mentioned that car break-ins are a common theme for the neighborhood. Then others I had met said they parked at another location then took a Lyft or Uber to get to the venue. At this point, I wasn’t going to leave so was just hoping for the best when I returned to my car (fast forward – car was OK!).

In the meantime, I had arrived just in time to see Belphegor hit the stage. I caught them once back when the played the Blackest of The Black Festival back in 2006 so it had been quite a while. A killer set of black metal tunes that started off with “Sanctus Diaboli Confidimus” then they went right into “Totenkult – Exegesis of Deterioration.” This set the stage for what was next.

Dark Funeral hit the stage around 10:30. The venue was packed with devoted metal fans from wall to wall. The band calmly walked out and took the stage looking like messengers from Satan himself. They started their set with “King Antichrist” and played crowd favorites like “Temple of Ahriman,” “My Dark Desires,” Goddess of Sodomy,” and “Nail Them To The Cross.” Their set kept the fans moshing and head banging throughout the night. Even though this show was completely sold out, it still had the vibe of an underground metal show. So glad I had the opportunity to experience such dark, loud music that is nothing but rebellious. Now that was a show!

Photos and set lists from tonight’s show below…

Go Venue ends 2017 with Sweet and Ask Jonesy and Co. at The Whiskey A Go Go

2017 was a great year for Southern California, I had the opportunity of covering many of the hottest shows out here. Last show of the year was a perfect way to end it, Sweet and […]

BY MAURICE NUNEZ | Go Venue Magazine Virginia based doom metal band, Windhand along with Satan’s Satyrs, played the El Rey Theater, an original art deco theater in the heart of the Miracle Mile – […]

Metal Allegiance under Nuclear Blast Label they brought their 3rd consecutive show to the House of Blues in Anaheim CA on January 25th, 2018. The core four of David Ellefson, Alex Skolnick, Mark Menghi and […]