Every winter, Pinnacle Bank Arena and 104-1 The Blaze puts on a Birthday Bash for the Lincoln hard rock radio station, bringing in the biggest names in hard rock to the Cornhusker Capital. Past artists include Avenged Sevenfold, Disturbed, Red Hot Chili Peppers. This year, on Tuesday, February 18, it was Korn and Breaking Benjamin’s turn to celebrate The Blaze’s birthday. Everyone packed the lower bowl and the floor for this incredible concert. 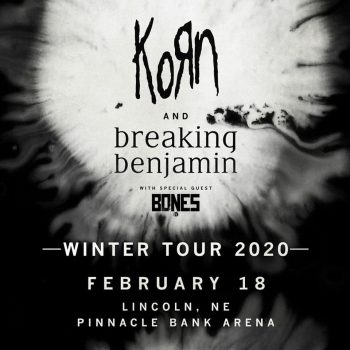 Bones UK was the opening act of the night. Hailing from Los Angeles via Camden Town, London, I was quite impressed by this band. Led by lead vocalist/rhythm guitarist Rosie Bones and lead guitarist Carmen Vandenberg, performing their self-proclaimed “future rock”, these women’s energy on stage was electric. Bone’s vocals were sensual and soulful. Vandenberg ripped through blistering guitar solos. They had such great chemistry and overall vibe onstage that translates well. Go check out their self-titled debut album that came out last year. I really hope they come back soon because they were just that good.

Next up was Scranton, PA’s own Breaking Benjamin. This was my fifth time I’ve seen them live ever since Benjamin Burnley rebooted the band back up in 2015. Whether you love them or hate them, you have to admit they are a bunch of talented musicians. Benjamin Burnley, though battling a cold, still gave it his all to the Lincoln crowd, even going in the crowd a couple times. They performed all their hits that everyone knows and loves. Check out their latest releases, their acoustic album, Aurora, as well as their last official album, Ember.

Finally, it was Korn’s turn to hit the stage. This was their first ever performance in Lincoln, which might surprise some people with all the Family Values tours and other countless tours they have been on. You would assume they would play the Pershing Center at least once, but no. First time for Korn in the Cornhusker Capital. Bringing their A game along with them, the crowd erupted in a frenzy when they hit the stage, with two mosh pits going on at the same time. Though all the members are pushing 50 years old, they still got it where it counts. Jonathan Davis is still one of the greatest frontmen of all time, enigmatic and energetic. The guitar duo of Munky and Head chugged power chords all night long. The rhythm section of bassist Fieldy and  drummer Ray Luzier were tight as ever. Let’s hope it doesn’t take Korn 25 years to play Lincoln. Check out their latest release, The Nothing, if you haven’t. A sincere thank you to Pinnacle Bank Arena and 104-1 The Blaze, as well as Live Nation Nebraska, for continuing on bring hard rock and heavy metal acts to Lincoln.

Heating up an…Otherwise…snowy Monday at the Bourbon Theatre

JESS BECK | Go Venue Magazine I almost fell out of my chair when I got the call. “Hey, there’s a live show at the Bourbon in Lincoln, NE…can you cover it?” “A what?” “Yeah, […]

INCUBUS WOWS ORPHEUM CROWD WITH 20 YEARS OF MAKE YOURSELF

REVIEW BY DAVID TAYLOR AND PHOTOS BY ROBERT A CHADWICK | Go Venue Magazine The Orpheum in Omaha, Nebraska was the place to be on Saturday, October 19, 2019 as Incubus was in town to […]