Rock and roll fans gathered up at The Machine Shop in Flint, Michigan on February, 20, 2020 to rage out to some heavy music.  The Sons of Texas are on their “The Resurgence” tour, bringing along Sunflower Dead and local group Vicariant to kick off the mayhem. 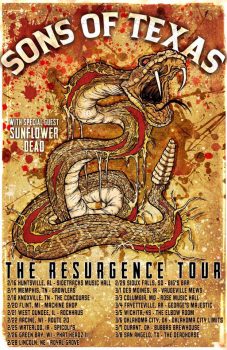 Vicariant has been rocking the local scene since 2012 and have gained a following.  With a steadfast urgency to their music, it draws you in as a listener and gets you rocking along.  With Zak Held on guitar, Mike Roberts on drums, Matt Gilson on guitar, Jake Morrison on bass and Brandon Curry on vocals, Vicariant is continuing to prove why they are persevering and rocking away with fun fueled music that gets the fans hyped up.

Sunflower Dead was next.  It had been a few years since I’ve seen Sunflower Dead and the first thing, I noticed was they no longer wore the white makeup on their faces that made them look wicked.  There were also a couple different band members with Brett Weir on drums and Evan McKeever on bass guitar to go with Jaboo on guitar who looks like a wild man with his long hair and beard and lead singer Michael Del Pizzo whose vocals have taken more of a serious tone as he croons into the microphone.  Del Pizzo still jammed out on the accordion and had the crowd rocking along.  Sunflower Dead is touring in support of their latest album C O M A, which is their most intense album to date.  Sunflower Dead’s fans, known as Evil Seeds are basking in the radiance from what Sunflower Dead churns out.  No more makeup but still wicked as ever, Sunflower Dead rocks.

Sons Of Texas have performed at The Machine Shop numerous times over the past several years as a support act for other bands.  It was nice to finally see Sons Of Texas headlining their own tour as these guys have certainly paid their dues and earned their time in the headliner slot.  Sons of Texas plays a blend of in your face metal with a dash of blues that is expertly executed by Jes De Hoyos on lead guitar, Jon Olivarez on guitar, Nick Villarreal on bass, Mike Villareal on drums and Mark Morales on vocals.

Fans crowded as close as they could get to the stage to feel that intensity Sons Of Texas riffed out.  Fresh off the release of their three song EP, ‘Resurgence’, Sons Of Texas has no short supply of songs to keep the audience entertained.  With new songs like “Resurgence”, “Spoils of War”, “Lock stock & Barrel” to older songs, “Blameshift”, “Feed The Need” and “Baptized In The Rio Grande”, amongst others.  Touching on a bit of ZZ Top showing off those bluesy rock chops to blasting out “I’m Broken”, that would make Pantera proud.

CONCERT REVIEW: Life of Agony at The Machine Shop

BY MIKE SHALER, Go Venue Magazine It was a blast from the past on September, 22nd, 2018 at The Machine Shop in Flint, MI as Life Of Agony made a stop on their Rise Of […]

MIKE SHALER | Go Venue Magazine Just four months ago, the Tom Keifer Band came to The Machine Shop in Flint, Michigan and rocked the place out to such high approval, I guess they couldn’t […]

BY MIKE SHALER | Go Venue Magazine On March 9th, 2019 in Flint, Michigan.  The Buick City Event Center was host to a wild celebration of gender bending, sex fueled rock and roll headlined by […]