Southern California based Them Evils are back on tour in direct support for Pop Evil which includes two feature performances on Shiprocked cruise. They continue to promote their “Rollin’ Stoned and Livin’ Free” EP which was a “New and Noteworthy” release at iTunes Hard Rock/Metal. Their first stop was the Bourbon Theater in Lincoln, Nebraska. Before the show Jordan Griffin (Guitar/Vocals), Jake Massanari (Bass) and David Delaney II (Drums) were gracious enough to allow me (on behalf of Go Venue Magazine) to hang out with them in their RV and ask a few questions. 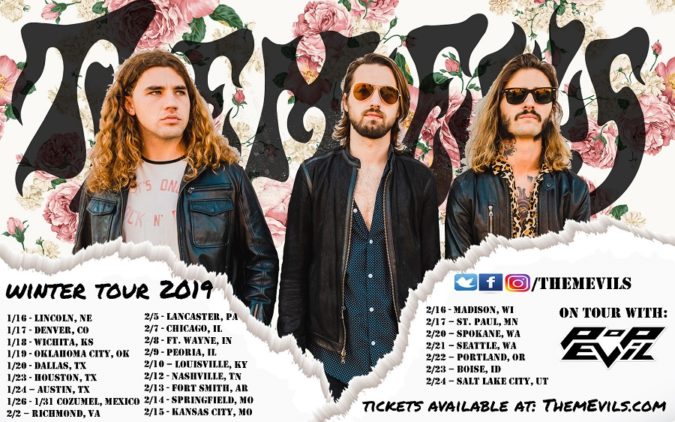 Them Evils had a breakout year in 2018 with their 1st single and video for “Got Me Rockin”, which premiered at Loudwire.  This band has and continues to gain momentum as their music is featured on key playlists including Spotify Rock Hard, Loud wire Wired Weekly, Apple Music Breaking Hard Rock and Pandora Rock Channel.

GVM: I know your single “Got Me Rockin” has gotten plenty of play and praise

Jason: “Got Me Rockin’” was the first one, with this tour we are rolling with “Practice What You Preach”

GVM: That song “Practice What You Preach” by the way has really good guitar work, I’m glad it’s going to be featured and I’m sure you’ll be playing that tonight. I would love to see that song with a 3-minute solo and a killer ending.

David: (Laughing) Have you seen our show already?

GVM: Not sure you know this but there is a site out there called Hard Rock Daddy which released their top 100 rock songs of 2018 and “Got Me Rockin’” came in at #53

(CHECK OUT THE VIDEO FOR GOT ME ROCKIN’ HERE)

GVM: 1st question, what guilty pleasure song could we find on your personal playlist

David: I guess mine would be Limp Bizkit cuz I know I can’t play that stuff in front of these guys.

Jordan: I would say Creed.

GVM: You guys played in Omaha back in May at the Lookout Lounge

Jake: Yeah, it was a really humid day, a/c broke at the venue

Jordan: Oh Yeah, it was super humid, our generator wouldn’t kick on it was so hot.

GVM: So the people who saw you there, what will they see tonight that they didn’t see then?

Jordan: “Practice What You Preach”

Jake: Another cover, that we won’t reveal yet and more energy 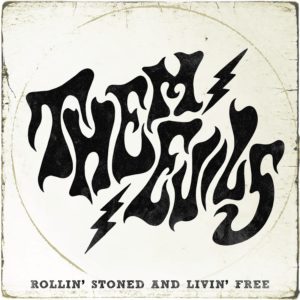 GVM: What was your first live show as Them Evils?

GVM: Jordan and Jake, you guys are from Nevada, then moved to So. Cal and hooked up with David right?

Jake: Yeah, we did like a run of shows, it’s always easy to book shows there. David was wearing drum gloves and dyed his hair purple

Jordan: He was wearing like a tank top with the Joker on it, we’re like this guys a fuckin’ newb, we are going to show him how to dress.

Jake: And now he has the best hair in the band

David: They taught me a lot, certainly.

David: I went to college for a couple of semesters, then dropped out to focus on the music factor of my life.  I was working and doing music and then, I don’t know, college was interfering, so I got rid of that part of my life.

David: Not at all, now we’re here.

GVM:    Besides your own album, what other album should everyone have in their collection

Jake: Abandoned Luncheonette by Hall & Oates.  Especially “When the Morning Comes” Try not to cry to that song

GVM:    Tour just started and we know about the EP, what do you see on the horizon, are we going to see the EP extended to an LP?

Jordan: We are trying to.

David:   Been working on new stuff for the past 5 months now.

Jordan: We want to put out an LP, we think it’s time.

GVM:    My last question really is just your turn just to preach, or whatever you want to say. What do you want people to know about you?

Jordan: Well, that we play balls out rock and roll and you should come to one of our shows cuz you’re going to have the most fun you’ve ever had at any show

GVM:    You do play balls out rock and roll for sure, you guys somehow and I’m not sure how you did it, but you listen to your sound and I don’t want to lump you into anything, but I hear Tesla or whatever, you have great backing vocals, but it’s not def leppardy, it’s not overdone, its totally raw and modern at the same time.

David: Yeah, just stay up to date on all our social media accounts, we got a festival coming up in Wisconsin in the summer, so we’ll be touring around then, so between now and then we are just going to hit the studio and record and hopefully have a full length out this year.

GVM: Guys, thank you very much for squeezing me into your schedule, I really appreciate it

GUYS:   No problem, thank you.

POP EVIL’S “BE LENGENDARY” TOUR KICKED OFF IN LINCOLN, NE AT THE BOURBON THEATER

BY JESS BECK | Go Venue Magazine It was a great night for a show. The last time Badflower rolled through the Bourbon, 60 people came to see them play their hearts out on the smaller stage in […]

Heating up an…Otherwise…snowy Monday at the Bourbon Theatre

JESS BECK | Go Venue Magazine I almost fell out of my chair when I got the call. “Hey, there’s a live show at the Bourbon in Lincoln, NE…can you cover it?” “A what?” “Yeah, […]