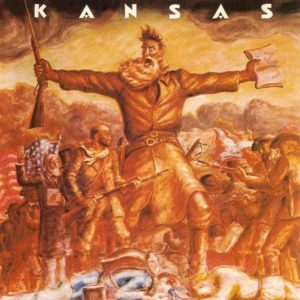 The most I remember about KANSAS was that on the evening during the winter of ’78/’79 my Mom and I went to shopping at the Westroads Mall, while inside the mall we decided to enter Woolworth (now gone) and went to the music area to browse the LPs and noticed their self-titled album (’74) with an interesting artwork cover of  an abolitionist John Brown; just after I learned about his history at my school; and asked my Mom to buy me one which she did.  We left the mall and went home, as soon as we got home I went straight to my record player, put my headphone on and played over and over.  It was cool album.  A short time later I got another LP – Monolith (’79) – it was great album also but that was about it; nearly forgot about them over the years due to lack of stories on them, not comparing to KISS, AC/DC and more.

As soon as I learned KANSAS ‘will perform’ at the Ralston Arena on Friday, May 12th, but realized there was a problem – it was same day as Council Bluffs’ rock station 89.7 The River’s one-day rock festival – ROCKFEST featured 8 bands included Soundgarden as headliner with Papa Roach and The Pretty Reckless as co-headliners with some great national bands.  At first, I went for ROCKFEST over KANSAS until about two weeks prior to the day of show, I changed my direction and went for KANSAS because I haven’t seen their live show so thought why not before too late – who knows they decide to cease touring anytime soon, we never know.

The members of KANSAS has changed over the years except drummer Phil Ehart and guitarist Rich Williams, both are the only members with the band since their 1974 self-titled debut album, along with bassist/vocalist Billy Greer, keyboardist David Mansion, vocalist/keyboardist Ronnie Platt, violinist/guitarist David Ragsdale, guitarist Zak Rizvi continuing to perform their classic songs such as Belexes (self-titled), Dust in the Wind (Point of Know Return – ’77) and Rhythm in the Spirit out from their latest and fifteenth studio album, The Prelude Implicit (2016).

An American rock band Winger based-out of New York City; was huge popular during the late 1980s and early 1990s; opened for them.

What a great show for one night.  Not only that, by seeing KANSAS’ backdrop of John Brown truly brought my memory back to my early teen years!  Glad I made the right decision.

See galleries below; hope you enjoy viewing those photos.