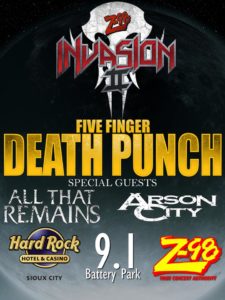 Sioux City, Iowa has been getting quite a few concerts that rivals what Omaha and Lincoln tend to get, all thanks to the Hard Rock Hotel and Casino they have up there. They have smaller scale shows at their indoor venue called, the Anthem, while their much larger scale shows are booked for the summer right next to the casino called, Battery Park. They’ve been having their outdoor shows there since 2015 and September 1, 2017 brought the metal to the venue, bringing Five Finger Death Punch, All That Remains, and Arson City for Z98’s Invasion. This was my first time attending a concert in Sioux City and it did not disappoint.

Omaha’s own Arson City opened the show up. This was my fourth time seeing these guys. They’ve been calling Sioux City their “second” hometown, so I had to see for myself why was that. They were the perfect band to open up a show of this caliber. The crowd was very receptive to them. The showmanship they brought with them was perfect for this crowd. Patrick Wilson, singer and “mayor” of Arson City, is one of best frontmen I have ever seen, always giving 110%. The whole band looked like they had a great time on stage. The Horror Squad, their drum line, is what makes them unique and stand out, in a good way. The played tracks off their latest album, The Horror Show, as well as new material, which sounded amazing, that they should be about close to go into the studio for a probable 2018 release. Local bands like Arson City make me proud to be from Omaha because they always work hard on every aspect of their brand, whether it’s music, show production, and merchandise, and that’s is why they’re one of the best out there.

The direct support of the night was Massachusetts’s All That Remains. They opened up with the title track of their latest album, Madness, which was released early this year in April on Razor & Tie. Singer, Philip Labonte, looked ripped in his cut off shirt, killing it on vocals. Oli Herbert, lead guitarist, looked like a wizard out their with his long hair and beard, shredding the guitar. Aaron Patrick, bassist/vocalist, has been doing a great job replacing Jeanne Sagan, killing it on the backing vocals. Unfortunately, when I was listening to them, I could hear they were using backing vocal tracks, kinda taking me out of their performance, but they still brought it. They performed quite an unusual cover during their set, Garth Brooks’s “The Thunder Rolls”. It really worked out for them with Labonte’s vocal range, as they are a band that likes to test the waters and try something new. Overall, great performance as they were also a perfect fit for this bill as Five Finger Death Punch have taken them under their wing.

Finally, it was Las Vegas’s Five Finger Death Punch to hit the stage. This was my second time seeing them. Singer, Ivan Moody, had been having some substance abuse issues, eventually putting himself in a treatment facility this summer. This was his third show back and was better than ever. Chris Kael, bassist, was an animal out there, headbanging with bearded dreadlocks flying in the air. Jason Hook, lead guitarist, solo majestically. They were joined by Philip Labonte on “Wash It All Away”, who has filled in a couple times for them in the past. During “Burn MF” they invited about 15 kids onstage, encouraging them to headbang and throw up the devil horns. I am glad there is a band like Five Finger Death Punch that can be equally heavy, but has melodic aesthetics to them that draws the mainstream crowd in. Looking forward to new material from them in the future, as they crank out hit after hit.

All That Remains Gallery