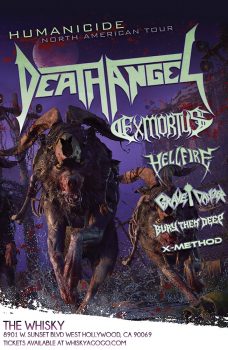 This is Death Angel‘s first headlining tour in years and they are touring in support of their latest album, Humanicide. For those of you not familiar with Death Angel, they are a thrash metal band from the San Francisco Bay area. They were initially active from 1982 – 1991 then again since 2001 to present day. In that time they’ve released nine studio and two live albums. They are known as one of the key bands from the 80’s Bay Area thrash metal scene. Tonight they were here in Los Angeles and the Whisky A Go Go was happy to welcome them!

We arrived just in time for Death Angel to take the stage. Singer Mark Osegueda and crew got things started with the title track for the latest album “Humanicide.”  The crowd at the Whisky went nuts as they greeted Death Angel back to LA! From there they went right into “Voracious Souls” and “Claws in So Deep.” The die-hard fans were singing along to all their songs while the mosh pits were relentless throughout the night!

The band did take a moment to wish guitarist Ted Aguilar a “Happy Birthday!” They brought out a cake and sang to him. The crowd assisted which made it that much more of a special moment. The band went on to play crowd favorites like “The Dream Calls for Blood,” “Father of Lies,” “Immortal Behated,” and “Mistress of Pain.”  Death Angel delivered a loud, energetic set of nothing but the best in thrash metal. It was an honor to have them back at The Whisky.

For those of you in Europe, be sure to catch them next February. Their current tour schedule can be found HERE.

See set-list and photos from tonight’s event below:

October 19, 2017 – The Troubadour is a very intimate place in the famous Santa Monica Blvd in West Hollywood. A perfect location for an intimate show. Greta Van Fleet is a rock ’n’ roll […]

The original platinum-selling BULLETBOYS lineup, featuring Marq Torien, Mick Sweda, Lonnie Vencent and Jimmy D’Anda, is returning in 2020! The hard rockers will kick off the reunion with a hometown gig on December 30 at […]