It’s been another memorable spring festival season for Danny Wimmer Presents, with record-breaking total attendance of nearly 350,000 during three consecutive weekends in May. Fans from around the world came together to enjoy performances from some of the biggest names in rock and metal, as well as enhanced onsite experiences at the 9th annual Welcome To Rockville in Jacksonville, FL May 3-5, brand-new events, Epicenter in Rockingham, NC May 10-12 and Sonic Temple Art + Music Festival in Columbus, OH May 17-19, as well as Chicago Open Air Presents in Bridgeview, IL May 18-19.

Here are some highlights from each festival:

“Welcome To Rockville was truly an experience; one that I won’t be missing next year” — WKMG News Orlando

Welcome To Rockville had its biggest year ever in 2019 with 99,000 in attendance over a sold-out weekend, May 3, 4 & 5 at Metropolitan Park in Jacksonville, FL. The 9th annual festival featured some of the biggest names in rock, with Tool, Korn, Rob Zombie, Judas Priest, Incubus, Evanescence, Shinedown, Bring Me The Horizon and Chevelle leading a lineup of over 50 music artists for Florida’s biggest rock experience.

The weekend began with a Thursday night pre-party headlined by Amigo The Devil, and concluded with a marquee set from Tool, which featured the debut of a pair of new songs, “Invincible” and “Descending,” the band’s first new music in 13 years. In between, Korn (Friday) and Rob Zombie (Saturday) closed out the festival’s first two nights with memorable sets that covered the span of each act’s enduring careers. Judas Priest delivered performances of rare tracks like “Out In The Cold” that they haven’t played live in 33 years. Papa Roach paid tribute to The Prodigy – originally slated to kick off their first U.S. tour in a decade at Welcome To Rockville before the untimely passing of frontman Keith Flint – with a cover of “Firestarter,” and Zakk Wylde offered a piano-led tribute to the late Vinnie Paul and Dimebag Darrell during Black Label Society’s set. Evanescence played their first rock festival in 2 years, and The Damned Things reunited for their first performance since 2011. Up-and-coming acts Boston Manor, Badflower and Yungblud delivered high-energy sets that showcased the best of music’s emerging talent as well.

See a special Welcome To Rockville video with sights from the weekend HERE.

Epicenter entered its first year with an impressive audience of 80,000 converging on the purpose-built Rockingham Festival Grounds in Rockingham, NC over the course of May 10, 11 & 12. The new three-day destination festival provided a unique experience with after-hours programming plus various camping options and amenities.

The weekend kicked off with a special Campers’ Pre-Party on Thursday featuring tribute acts Nightrain and Thunderstruck, as well as the Hellzapoppin Circus Sideshow and local Charlotte band Killakoi. The main event featured a rousing finale from chart-topping rock act Foo Fighters, who offered an incredible two-and-a-half hour set including a special rendition of “My Hero” dedicated to frontman Dave Grohl’s mom on Mother’s Day. Korn closed out night one with a jam-packed set list of hits after a moving tribute to late young rock fan Ally, who lost her battle with cancer in late 2018 after attending previous Danny Wimmer Presents festivals through the partner organization Fxck Cancer / Dyin 2 Live Dreams Program.

Some of the other highlights of the weekend included guitar phenomenon Nita Strauss joining Evanescence for a surprise collaboration on the song “Disappear,” The Crystal Method’s special tribute to Keith Flint, the late frontman of fellow electronica act The Prodigy, the reunion of Eddie Trunk, Don Jamieson and Jim Florentine from That Metal Show during two rare sets, and after hours performances from Wilson, Hyro The Hero, and Arrested Youth.

At both Welcome To Rockville and Epicenter, guests were able to experience the Boilermaker pop-up featuring Metallica’s Blackened Whiskey and Enter Night Pilsner. Blackened, a super-premium American whiskey blend, crafted by the late Master Distiller Dave Pickerell and finished in the earth shattering music of Metallica, and Enter Night Pilsner, a collaboration with the rockstars of craft brewing Stone Brewing Company, came together under one roof to offer guests a one-of-kind musical festival experience. 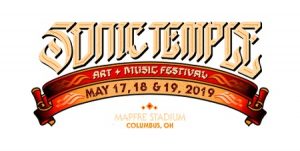 “Reminded us all of why we cling to unifying moments like this, and, overall, the entire weekend at the Sonic Temple Festival” — Loudwire

Foo Fighters capped off the festival with an extended seat featuring special surprises including The Struts’ frontman Luke Spiller appearing alongside Foo Fighters drummer Taylor Hawkins in a cover of the Queen / David Bowie song “Under Pressure” and Pauly Shore contributing to a rendition of the Foo Fighters’ “My Hero” (dedicated to the comedian’s father who had passed away over the weekend). The Cult performed several tracks from their same-named album Sonic Temple, System Of A Down’s Serj Tankian joined Tom Morello on stage for a performance of Audioslave’s “Like A Stone” (dedicated to the late Chris Cornell on the anniversary of his passing), and Lamb of God’s Randy Blythe made a guest appearance during Gojira’s set.

Throughout all three festival weekends, lucky fans also enjoyed exclusive acoustic performances from bands including Beartooth, Fever 333, Grandson, Shvpes, Wilson and Dirty Honey during the Zippo Sessions. Attendees 21+ had their thirst quenched by a variety of beverages, including selections from the Caduceus Cellars & Merkin Vineyards Wine Garden (owned by Maynard James Keenan, co-founder of international recording acts Tool, A Perfect Circle, and Puscifer), killer cocktails at the Heavy Tiki Bar oasis, and local craft beer. Fans were also able to meet their favorite bands and receive autographs at the Monster and f.y.e. Fan Experience tents, try out the latest gear at The Music Experience tent and learn more about animal rescue Take Me Home and the Fxck Cancer / Dyin 2 Live Dreams Program. 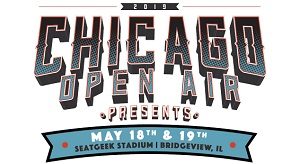 “The two-day festival celebrates the legacy of heavy metal, and each night’s headliner is one of the biggest bands in the genre” — Chicago Reader

Chicago Open Air Presents brought a massive two-day stadium show to SeatGeek Stadium in Bridgeview, IL, just outside downtown Chicago during the weekend of May 18 & 19 with crowds of 50,000 taking in the memorable performances. Tool closed out the event with performances of brand-new songs “Invincible” and “Descending,” the band’s first new material in 13 years. System Of A Down topped things off Saturday with a high-energy headlining set, while Ghost, The Cult, Gojira, Meshuggah and In This Moment delivered captivating performances. Buzzworthy up-and-comers Alien Weaponry and Fever 333 also proved their promising futures with their attention-grabbing appearances.

Welcome To Rockville, Epicenter, Sonic Temple Art + Music Festival and Chicago Open Air Presents are produced by Los Angeles-based Danny Wimmer Presents, one of the largest independent producers of destination music festivals in America. Additional DWP events include Aftershock Festival, Bourbon & Beyond, Hometown Rising, Louder Than Life and Rock Allegiance. They’re also the co-creators of Rock On The Range, America’s largest and most acclaimed rock festival, which celebrated its 12th and final year in 2018 with 140,000 in attendance; Carolina Rebellion, which wrapped in 2018 after 8 record-breaking years, including over 100,000 in attendance multiple years at the annual event; and Northern Invasion, which had 50,000 in attendance for its fourth year in 2018.

Festival producer Danny Wimmer Presents has released the following update about their 2020 music festivals: There are no pre-existing guidelines for what festivals should be doing during this unprecedented time. Like the rest of the music […]

LIVE REVIEW: Blue October Turns on the Heat During a Chilly Night