Barb Wire Dolls are a labeled as a grunge Punk rock band originated in Greece in 2010. They played many times in Greece until KROQ radio host Rodney Bingenheimer noticed them and they relocated temporarily to Los Angles, California in December 2010. Barb Wire Dolls had their share of performances at knows venues on the Sunset Strip like The Roxy, The Whisky a Go Go, and The Viper Room. Also headlining festivals Texas Showdown, Ink Life,and Rock4Unity. The band has also played on main stages at Wacken Open Air, Riot Fest, Rebellion, and Back to Future festivals. Barb Wire Dolls are under the record label Motorhead Music. One would say that they have accomplished a whole lot in only seven years in the industry.

I’m sitting in my bed as I open the file for Barb Wire Dolls newest album Rub My Mind (2017). First song starts Back in the U.S.S.A instantly I’m taken back to when I was in high school. The punk kid that only went to class because “I had to” walking around with my CD player and a backpack full of punk CD’s which included bands like The Misfits, The Ramones, Rancid, Sex Pistols, The Clash and of course bands with female vocalist because those where the females I looked up to, The Distillers, The Selecter, Hole, Yeah Yeah Yeahs and the list goes on. But in the first two song all of these memories came rushing back and I was instantly hooked. Barb Wire Dolls bring back that raw sound of good old punk/grunge music that is kind of lost now. Vocalist Isis Queen is a bad ass chick! I had the pleasure of interacting with her twice, without even knowing who she was. I was at a Lower Class Brats show (2015/2016) in Hollywood at The Roxy and before the show started a female with wild blonde hair, Dr.Marten boots, fishnet stocking and all, approached me and handed me a flyer and said she was promoting her band that would be performing at The Viper Room. I remember looking at her and thinking Dam! this is a bad ass chick handing out flyers like they use to back in the day, it felt very personal and very genuine. A few days later I was at The Rainbow bar and as I was making my way back to my car once again this wild haired blonde chick comes up to me and hands me a flyer, I instantly recognized her and I commented her one wardrobe or something, she smiled and said “Thanks hope you make it to the show” turned around and kept handing out flyers. Her passion for her music and her perseverance are some of the qualities that great musicians are made of. I really appreciated the homage Barb Wire Dolls pay to the Iconic band The Clash on the second track If I Fall probably my favorite track on this album.

I will be looking out for this band for when they come to town in Southern California. I would love to see them live, I can only imagine the energy and the performance they will put out. Listening to Rub My Mind has made me a fan, finally a great fucken punk band that can I enjoy and will be listening to. 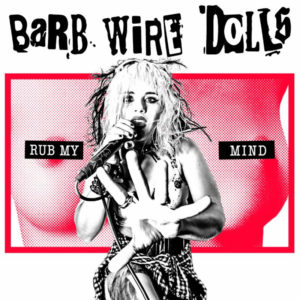 On July 29th 2017 Concrete Jungle Entertainment hosted one of the biggest Punk festivals for a second year in a row in the heart of Orange County California. Punk Invasion 2K17 and 2K16 are probably […]

ALBUM REVIEW: Hell of a Ride by Arson City