American Industrial Metal Juggernaut MINISTRY led by Al Jourgensen have announced a co-headlining U.S. tour with experimental rap trio DEATH GRIPS. The tour kicks off at The Palladium in Worcester, MA on October 13 and will hit Pittsburgh, Seattle, and San Francisco before concluding on November 11th at Gas Monkey Live in Dallas,TX.

MINISTRY will release their 14th album, AmeriKKKant, this fall. It is the follow-up to 2013’s From Beer to Eternity. Check out the promo video as well as pre-order your copy of the album on Pledgemusic.com.

Tickets for the upcoming tour go on sale this Friday, July 21st! Links for each date are included below. 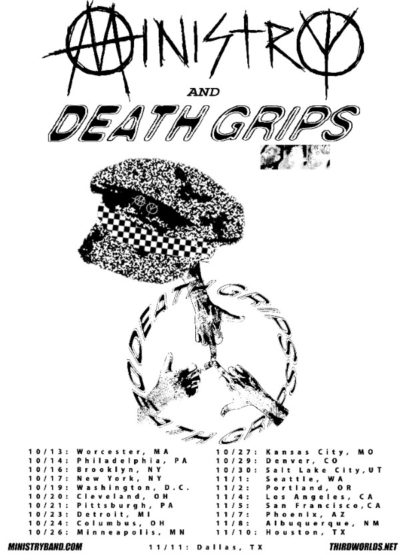 For decades, the powerhouse of psychotic sound that is MINISTRY has overcome millions with releases such as FILTH PIG, THE MIND IS A TERRIBLE THING TO TASTE, PSALM 69, FROM BEER TO ETERNITY, and a flood of others. Since the 80s, founder Al Jourgensen, has been combining elements of synth pop, punk, metal and even dub in a way that is instantly recognizable and has influenced many other bands.

With timeless classics such as “Just One Fix,” “Thieves,” and “Jesus Built My Hotrod,” MINISTRY are one of a kind musical pioneers.

With six Grammy nominations to date, over 3 million records sold, more than 2,000 live performances, and movie soundtrack work on Hurt Locker, AI (Artificial Intelligence), Matrix, RoboCop and SAW,MINISTRY has been contributing to the music industry for over three decades.

In the wake of the latest release, it’s time to reciprocate the dedication shown by our sincere, and die hard fans. AmeriKKKant is MINISTRY’s 14th studio album and most revolutionary album to date. We want to bring you front and center to witness the madness unfold.

Tonight was the last night of what was a 6 show mini-tour of the Wax Trax’s film “INDUSTRIAL ACCIDENT: The Story Of Wax Trax! Records”.  This is the story behind the independent record store and […]

On November 9, 2016, Ministry’s Al Jourgensen woke up and said, “It’s time to make a f*cking album.” When six-time Grammy-nominated Jourgensen had released the final album of his blistering Bush-era trilogy – Houses of […]