The six track EP release from the Sioux City based Calling Grace is out for purchase on 10th November 2018.  “We´re Out There Somewhere”,  is the second EP from Calling Grace; the earlier release “Here´s to the End” (2017), had some live success and the year brought the band a Z98 Underground Awards (Best Local Band) and (Best Cover Song) with “Don´t You Forget About Me” (2017) originally released by Simple Minds in 1985.

There are signals of Linkin Park based opening riffs, vulnerable vocals that establish the validity of the lyrics, offering a Thom Yorke from Radiohead huskiness in the slower and lower keys. Lyrically and vocally, the transitions between verse-chorus sections are well staged.  Whilst providing definition, there is no stop-start and the flow of narrative is skillsfully woven together.  This has taken time to compose, and has given the verses as much substance as the chorus.

The drums are exceptional throughout, the use of triplets and fills that are laced through tracks should have a showcase feature on recorded tracks and moreso in the live venue. There is an overlap three of four beat snare pattern in the verses of “Something Better” that almost replicates a heart skipping a beat. Although minor, the hidden strengths of Calling Grace are the prominent features.

The guitar sound is feel-good, the rhythm is warm and full whilst the lead knows when and how far to stretch within each track. The clean chorus filled intro to “Return to Sender”, is a high point on the EP that once refined and replicated will guide the direction upwards. In “Seven”, it is worth listening to the guitar work underneath and chasing the vocal line in the chorus. Bass style has been tied into each section, there are rolling holds and snappy follow riffs and it would have been good to have a bass feature somewhere in the album.

The EP has set out to show range and scope of the band, there are 90´s style indie-rock with a grunge texture on “Rose” and “So Close to Gone”. The band utilize their individual components to key into the 00´s rising aggression without moving into the punk-sphere. A good example of this is “Penny For Your Thoughts”, heavier and yet contained, not unlike an early Placebo number.

Stand Out Tracks:
“Seven” , opens well with an addictive and not over played guitar riff intro, this shows control over the use of sound and the dynamic between drums and strings are balanced. The amps and effect unit have been set to produce a particular vibe and this works.  The vocal is phased in has a smoother style Papa Roach feel for the slightly older audience.  The guitar lead section at the bridge point is stable and uses the space to highlight the talent in the band.  The hidden feature in this track is the drumming that sets some outstanding patterns upon which the song scans, the basslines on occassion duplicate the drum fills in places and this draws the track together in an intelligent way.

“Return to Sender”, my favourite on the album, the track is stylistic and is the most effective combination of vocal/musical blend that suits the band perfectly.  The vocal is in control of this track, the listener follows this lead element.  There is an effective Foo Fighters touch to the composition, that allows the song to graduate lyrically and peak effortlessly whilst disguising the effort that is being put in by the band.  There is complexity that has been masked and this is a noteworthy feature.

Overview
Calling Grace are laying their foundations and working through their ‘becoming‘ in a public arena. In an almost democratic way, the direction that will create their future sound and style is being decided based upon the live and recorded responses.  The ability to combine a range of individual talents to procure a vast range of potential pathways is strategically appropriate for an EP.  A future album no doubt will be a defining best of everything that is crafted based upon the methods used to decipher who the band are and will be. This will be very interesting to follow and as a feature of developing competence, both direction and efficacy should shine through. The EP has some good outputs, technical ability and depth and is well worth a listen. 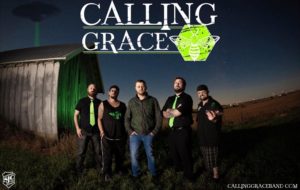 30 Years Ago: Slayer Released ‘Seasons in the Abyss’

ANTHONY BOLLERO | Go Venue Magazine There’s not much that can be said about Slayer’s fifth studio album that hasn’t already been said over the past 30 years.  Many will argue that Reign In Blood […]

Punk not dead Barb Wire Dolls are a labeled as a grunge Punk rock band originated in Greece in 2010. They played many times in Greece until KROQ radio host Rodney Bingenheimer noticed them and […]

Stir Cove Was Full of “Good Vibes” as the Jason Mraz Tour Made A Stop In Sunny Council Bluffs, Iowa – 7/14/19