Supergroup Hellyeah is back, dropping a new album in September 2019, their first album since “Unden!able” dropped in 2016, marking “Welcome Home” as their sixth studio release. Make no mistake; while this album is guttural, it’s also approachable if it’s your first introduction to these guys in 2019. This album is also a bittersweet return in that it features the last recordings of legendary drummer Vinnie Paul, formerly of Pantera, before his untimely death of a heart condition in 2018. In that regard, this album is both a resounding “welcome back” and a powerful “farewell” in the same stroke.

Opening with the track “333” the album hits right out of the gate. Vocalist Chad Gray blasts the eardrums with screaming, while accompanied by heavy drum lines and saturating guitar riffs, which is always a strong beginning to an album. “Oh My God” has the feel of the beginning of a Volbeat track, and right before you get settled into this, Vinnie begins to hammer on the drums. This track sounds refreshingly new, but also easily familiar as it captures some of their signature sounds. I like this track as it also has familiar metal themes, dealing with demons and wrestling through those processes.

Continuing on, the title track to the album, “Welcome Home” is a theater track. It opens slowly, and continues to build as the track progresses. I think that this song is compelling as to me, it deals with familiar themes of depression which feels like a welcome home to most. “I’m The One” continues the theme of heavy guitar riffs, ripping vocals, masterful drumming and full bass lines. “Black Flag Army” is possibly the best track on the album, beginning with a simple chord progression, building into something you can really headbang to. It’s quite a slugefest, flying a metaphorical black flag for Metal fans everywhere. 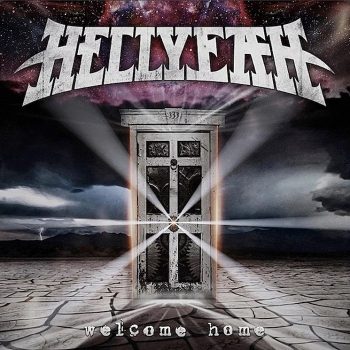 “At Wick’s End” is also an approachable track, as we’ve all been there before. We work too much, we pour too much energy into something. An excellent track that is highly relatable. “Perfect” is quite possibly my favorite track on the album, and I’m sure if you listen to it, you could dedicate it to any ex you or someone you love ever had. My favorite line as a photographer myself is, “You’re as perfect as a photo that’s out of focus.” It’s an absolutely brilliant track, wishing nothing but the worst for whomever it’s written towards, and whether it’s about your ex, a lover’s ex who kept two or three people on the side, or someone else entirely, you’d be hard pressed to find a better homage to such feelings of rage.

“Bury You” is another solid production on this record, and the guitar riffs can’t be ignored. While I’m not a huge fan of the tired lyrics, “Drive it like you stole it,” the track still hits you straight in the gut. “Boy” is probably the weakest track on the album, and it’s surprising to hear something akin to Limp Bizkit on an album like this, but you can’t fault a band for trying new things. This is how artists grow, and it takes an incredible amount of courage to release a rap/nu-metal track on an album where this style doesn’t really fit in.

“Skyy and Water” is the last and final track on the album. And while the album opens with gut tearing screams and heavy guitars, it ends in the opposite manner. Softer guitar strums and clean vocals begin this track, and if you listen closely, or maybe not even closely at all, you can imagine that this track is homage to Vinnie. And it’s always refreshing to hear an actual ballad on a Metal album, even if it was under the most horrific of circumstances. One more track accompanies this song, called, “Irreplacable,” where we can hear the spoken words, “A good time is a good time, a bad time is a bad time, and a wonderful time is irreplaceable.”

This album indeed was a wonderful time, and while I wasn’t a huge fan of every track on it, overall, it’s incredibly solid. For fans of Hellyeah, it will feel like home and a journey at the same time, which is only fitting as I’m quite positive the band intended this to be the case. Hellyeah has hired Stone Sour’s Roy Mayorga to fill in on drums for the foreseeable future.

Vinnie Paul Abbott wasn’t just a drummer, he was an iconic fixture in the metal and hard rock community, a pioneer, and an absolute legend. He was a self taught drummer who went on to […]

BY MAURICE NUNEZ | Go Venue Magazine Jason Christopher of (Prong/Corey Taylor) tried something new this evening. Tonight, Jason invited some friends and fans for a night of comedy and his first ever solo acoustic […]