Friday nights are the perfect concert nights, so it was no fault that Hellyeah’s show at the Waiting Room Lounge in Omaha, NE on July 7 was a sell out. Many people packed the smaller sized venue to see a stellar bill of bands. It was a good time for all. 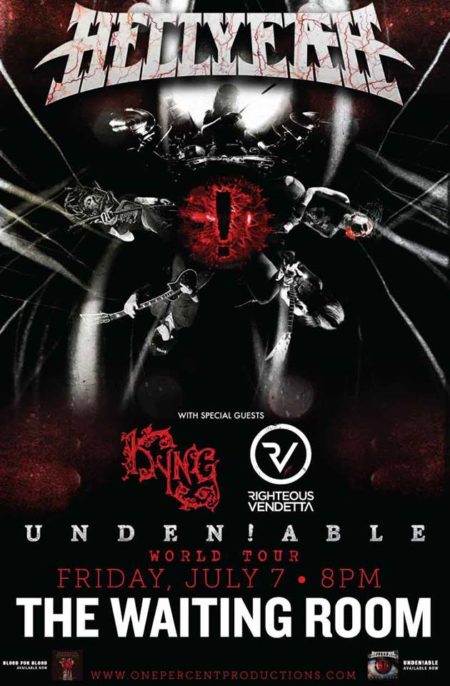 First band up was Righteous Vendetta from Cody, Wyoming. I love it when opening bands pack a punch to get the night started, and this band was one of them. They are on tour in support of their latest album and first release with Century Media Records, released in March of this year, Cursed. Lead singer, Ryan Hayes, was very energetic and fun to watch onstage. Justin Smith and Justin Olmstead, guitarists, shredded some tasty licks. Drummer, Zack Goggins, played with such passion. Bassist, Riley Haynie, sang some worthy harmonies. It was a great start to the night!

The next band up was Los Angeles, California’s own power trio Kyng. I had been looking forward to seeing this band live after hearing their last two albums. They are on tour in support of their latest album that was released in October of last year by Razor & Tie, Breathe In The Water. Everyone in this band is a world class musician. Eddie Veliz, vocalist and guitarist, played guitar like a badass and a force on stage, completely underrated vocalist. The rhythm section of Tony Castaneda, bass, and Pepe Clarke, drums, was tight as it can be. Pepe Clarke was an animal on drums, never slowing down and fierce. I hope they come back to Omaha, again, because they put on a great show.

Finally, it was the moment everyone had all been waiting for, the mighty Hellyeah from Dallas, Texas. They’re supporting their latest album, Unden!able, that came out in June of last year. This was my third time seeing them and they did not disappoint. Chad Gray is one of my favorite frontmen. He is just a madman on stage. I loved when he would talk to the crowd about empowerment and how great heavy metal music can bring so many people together, a truly incredible human being. Kyle Sanders, bass, also has a great stage presence, his hair flying everywhere. And then there is Vinnie Paul, one of metal’s, even rock’s, greatest drummers ever. At 53 years old, he still a force behind the kit, with no showing of slowing down. Hellyeah put one of most blistering sets I have ever seen in that packed room full of metalheads. They are another band that Omaha loves to support and hopes to come back.

Gaelic Storm Touches Down In Omaha

BY JOE DeSANTI | Go Venue Magazine The Slowdown was taken over by Gaelic Storm, who played for a huge crowd on Tuesday night August 6, 2019.  Formed in 1996 in Santa Monica, California, the […]

Prince’s Memory Lives on with the Prince Experience

BY JOE DeSANTI | Go Venue Magazine On Saturday night November 30th, the Slowdown in Omaha, Nebraska hosted Gabriel Sanchez’s The Prince Experience.  What started out as a small theater production of Purple Rain, has […]