Slayer – Tom Araya, Kerry King, Gary Holt and Paul Bostaph – along with Trafalgar Releasing, Nuclear Blast Records and Prime Zero Productions, are pleased to announce the upcoming release of the new short narrative film and concert, Slayer: The Repentless Killogy, coming to theaters worldwide for a one-night event on November 6.  Due to be screened in over 1500 theaters around the world.  Tickets  will be on sale starting October 9 at www.slayer.film.

Revenge, murder, bloodshed and retribution. The Repentless Killogy film was written and directed by BJ McDonnell, who conceived and directed the three brutal music videos – “You Against You,” “Repentless,” and “Pride in Prejudice“- for Slayer’s final studio album Repentless (2015).

“When we set out to do these initial three videos,” said McDonnell, “our intention was to continue the saga of Slayer and Wyatt at some point down the line. But this is the band’s final album and world tour so this story, the three videos and the “Repentless” live concert at The Forum, is a perfect way to wrap up. This is the end of the monsters.”

Uncompromising and unmissable, part one of “Slayer:  The Repentless Killogy” begins with the powerful short narrative film that brings together the music of Slayer and the grisly story they wanted to tell. Opening with the trilogy of music videos assembled as one chronological storyline, we are introduced to the narrative’s main character Wyatt, a former Neo Nazi associated with a gang known as “The Hand Brotherhood,” whose signature mark was a bloody handprint left after a murder had taken place. 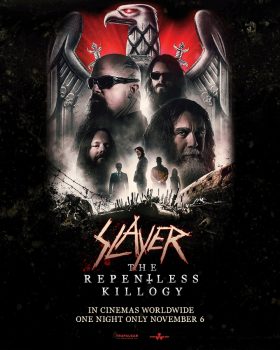 Part two of The Repentless Killogy features Slayer‘s entire live set performed at the Los Angeles Forum on August 5, 2017 and was directed by Wayne Isham who has directed videos for artists including Metallica, Foo Fighters, Michael Jackson, Kelly Clarkson, and Britney Spears.  Presented in front of one of the most striking stage productions of the band’s career, Slayer performs fan-favourite’s including “South of Heaven,” “War Ensemble,” “Mandatory Suicide,” “Dead Skin Mask,” “Raining Blood,” and “Angel of Death.”

Following the global theatrical premiere, on November 8, the film will be available digitally and on Blu-ray, and the soundtrack from that concert will be released as both a two-disc vinyl and two CD packages.

Gerardo Martinez of Nuclear Blast Records said: “When Slayer, the RSE family, BJ and I were talking about how thrilled we were with the outcome of the three videos from ‘Repentless,’ never did we imagine that what we had in our hands was basically this piece of brutality that would end up in movie theatres world-wide.  Everything from matching Slayer’s ferocity and heaviness in video form, to expanding into a longer narrative and live show has created the perfect Slayer atmosphere.  We are beyond thrilled to give fans around the world the opportunity to join us on November 6 to witness a pure slab of f*ckin’ insanity!”

Marc Allenby, CEO of Trafalgar Releasing added: “Trafalgar Releasing are pleased to be collaborating with Slayer, the team at Nuclear Blast and the RSE Group on the upcoming global cinema release of Slayer: The Repentless Killogy. The film expertly demonstrates how Slayer has become one of the most influential metal bands of the last three decades, bringing together the creative forces of film and music to create a must see on the big screen. We look forward to seeing how fans react when they come together for this unique experience.”

2019 has seen a strong year for music releases from Trafalgar Releasing in cinema around the world. Recent successes include BRING THE SOUL: THE MOVIE, which became the single largest event cinema release globally, Grateful Dead’s 9th Annual Meet-Up at the Movies, Tribeca documentary Between Me and My Mind about Phish frontman, Trey Anastasio, Rush Cinema Strangiato 2019 and The Cure: Anniversary 1978-2018 Live in Hyde Park London. Today sees the global release of Roger Waters  Us + Them, which received its World Premiere at the International Venice Film Festival last month.

Slayer: The Repentless Killogy will be screened in cinemas around the world on November 6. Tickets are on-sale from October 9 at Slayer.Film, where fans can find the most up-to-date information regarding participating theaters and sign up for event alerts.

SLAYER TO MAKE ITS EXIT WITH ONE FINAL WORLD TOUR

The end is near… After making some of the most brutal, breathtakingly aggressive, all-hell’s-a-breaking-loose music ever created, playing nearly 3000 concerts in all corners of the world, receiving countless awards, gracing hundreds of magazine covers, […]

BY ROBERT A CHADWICK | Go Venue Magazine On Thursday night, January 16, 2020, the city of Anaheim, California, at the House of Blues called for a round of pure heavy metal. Metal Allegiance was […]

WORDS BY EVAN J THOMAS AND PHOTOS BY ROBERT A CHADWICK | Go Venue Magazine Friday night was one of the most anticipated shows of the year in the Chicagoland area. The breaking news first […]