Without question, AC/DC are one of the greatest rock bands in history. Their mammoth power chord roar became one of the most influential hard rock sounds of the ’70s and is synonymous to rock culture to this day. It continues to be one of the defining sounds of rock and metal, and combined with the larynx-shredding vocals of Bon Scott (1974 – 1980) and Brian Johnson (1980+), the band enjoyed commercial success well into the 2000s, even up until 2016 selling out stadium shows across the globe. 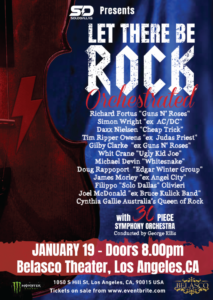 LET THERE BE ROCK – ORCHESTRATED is a world first and brings to light a unique production scale that brings the thunderstruck sounds of AC/DC in to a world all of its own, featuring a line-up of some of the world’s best rockers coming together to form a super group and backed by a 30-piece Symphony Orchestra to power out the biggest sound ever created! As previously announced, this unique concert event will hit four stages in Australia this year in Melbourne, Perth, Sydney and Thirroul.

The team behind LET THERE BE ROCK is pleased to announce that next year, on January 19, 2019, LET THERE BE ROCK – ORCHESTRATED will bring down the house at the one and only currently scheduled U.S. event, taking place at the Belasco Theater in Los Angeles (just before the 2019 NAMM Show).

Tickets are on sale NOW via Eventbrite and can be purchased HERE.

A VIP meet & greet is also available to attendees and can be purchased via the Eventbrite link above. The meet & greet will take place post-show and will include a photo op with the entire all-star band, plus early entry into the theater for prime viewing position selection!

At LET THERE BE ROCK, attendees will hear the full orchestrated rock arrangements of many AC/DC classics including ‘Highway To Hell’, ‘You Shook Me All Night’, ‘T.N.T’, ‘Whole Lotta Rosie’ and so many more in this two-hour concert production. Imagine ‘Back in Black’, the seminal anthem of generations, with the power of the 30-piece Symphony Orchestra conducted by Australia’s most celebrated conductor – George Ellis, behind one of the most rocking super bands assembled! 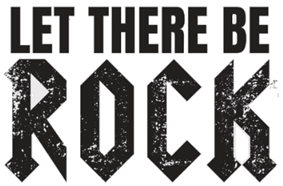 Learn more about LET THERE BE ROCK’s star performers!

Drummer Simon Wright joined AC/DC after the departure of Phil Rudd in 1983. AC/DC recorded three albums with Wright in the mid-late 80’s including ‘Fly On The Wall’, ‘Who Made Who’ and ‘Blow Your Video’. Wright left the group in 1989 to join American heavy metal band, Dio.

In 2001, guitarist Richard Fortus joined legendary hard rock band Guns N’ Roses and began touring with them and recording for the band’s long awaited Chinese Democracy record. The album was released to great anticipation in 2008 and Richard has continues to tour with the band. Guns N’ Roses have played sold out shows on nearly every continent in front of millions upon millions of fans. During his Guns N’ Roses downtime over the last 10 years, Richard has found time to always perform and record. From Enrique Iglesias to Rihanna to Thin Lizzy to Nena, Richard has played all over the world with a dizzying array of artists. He also recorded for Repo! The Genetic Opera, Role Models, Monster, and The Fast and the Furious soundtracks. Angela McCluskey, Jesse Malin, Fiona Apple, Tommy Stinson and The Crystal Method are just a few of the artists whose albums Richard had contributed to. In 2011, Richard lived a lifelong dream, joining and performing with the legendary Thin Lizzy. In 2013, Richard joined The Dead Daisies, a supergroup featuring Jon Stevens (INXS) and David Lowy (Mink). The band opened for ZZ Top, Aerosmith, Alice in Chains, Jane’s Addiction and many other top bands. The band’s first headlining tour was in February 2014 in Australia and was a resounding success, leading to opening gigs in the U.S. for Kiss, among others. In 2014, the Face I Love EP was released – Richard’s first studio work with The Dead Daisies.

Growing up in a house full of musical instruments, Cheap Trick drummer Daxx Nielsen gravitated towards the drums at a very early age. After high school, Daxx travelled the U.S. extensively with his original band, Harmony Riley, and upon the band’s dissolution, Daxx packed up and moved to Los Angeles where he quickly got into the studio and touring world. His first break was drumming for surf guitar pioneer Dick Dale. While on breaks from touring he took part in dozens of recording sessions, performed anywhere and everywhere with numerous local artists, and formed A Fine Frenzy with singer/songwriter Alison Sudol. This led to years of touring and recording with Brandi Carlile, Cory Chisel and the Wandering Sons, The Smashing Pumpkins, and numerous others. Since March of 2010, Daxx has been the touring drummer for the Rock And Roll Hall Of Fame inducted band Cheap Trick, performing over 1,000 shows with them and recording the critically acclaimed Bang Zoom Crazy Hello. Daxx also co-wrote and drummed on the score for Oscar Award Winning documentary Undefeated.Some of the other projects Daxx has been involved with over the last few years are drumming for Eddie Vedder and The Fab Faux, as well as recording with numerous projects.

Doug Rappoport is a British born, American-raised guitar player. His style is deeply-rooted in the blues while utilizing a more modern hard rock tone and approach. His guitar playing skill sets and knowledge base are being compared to legends from Jimi Hendrix and Eric Clapton to Eric Johnson and Eddie Van Halen. Doug’s rapidly growing popularity is attributed to a blend of modern guitar techniques combined with classic phrasing and melodic sensibilities harkening back to the masters, all rolled into a unique style that is unmistakably his own. Touring extensively with Edgar Winter for 11 years as well as guitar legend Rick Derringer plus sharing stage and studio with a who’s who of renowned artists, he has honed aggressive chops, confident stage presence and overall pro savvy through substantial road experience. An in-demand session guitarist; Doug’s work is featured in many national television and radio commercials. Notable spots include clients such as: Ford, Metro PCS (exclusively featuring Doug’s guitar playing), and ORCAN. Plus, he’s been a stand out guitarist on “American Idol”, and his playing can be heard in numerous films and film trailers. Many recording sessions are produced in his home studio, especially for guest appearances on albums and cues for TV spots such as “NCIS Miami”.

Michael Devin has been the bass player for Lynch Mob (George Lynch), Jason Bonham’s Led Zeppelin Experience and is currently touring as the bass player for Whitesnake. Known as one of the world’s leading rock bassists, Michael will be joining the orchestra as our very special guest for this one show only.

Whit Crane is a founding member and lead singer of the rock band Ugly Kid Joe. During Ugly Kid Joe’s inactivity, Crane went on a year-long tour with New York hard rock band Life of Agony before forming Medication with ex-Machine Head guitarist, Logan Mader. Over the years, Crane has performed guest vocals on several songs, including “Reaching Out” with Mark McGrath of Sugar Ray (from the Lynn Strait tribute album Strait Up), “Born to Raise Hell” by Motörhead (also featuring rapper Ice-T) and “Voodoo Brother” by Glenn Tipton of Judas Priest. Crane’s filmography includes Ellie Parker, in which he has a cameo appearance as an acting student, and Motörhead’s 25 & Alive Boneshaker, where Crane appears as himself. Crane also performed as vocalist for Another Animal. The band formed with members of Godsmack and released an album in 2007. In 2011, he performed with metal tribute band Hail! in Istanbul, Turkey and also made regular appearances with Motörhead – the latest being at the O2 Academy Glasgow on November 9, 2012 singing “Killed by Death”. In 2016, Crane collaborated with Lee Richards, formerly of Godsmack, to form a band called Richards/Crane.

Wikipedia defines “classic rock” as the album oriented rock radio format developed in the United States in the early 1980s. This format came to include a large playlist of songs from the 1960s to the early 1990s. In the SoloDallas philosophy, any definition of “classic rock” must first and foremost pay heed to the warmth of the raw tube sound heard on those records, the gritty, growling guitar tones with those head aching, cutting through medium frequencies, the violin-like vibratos of oh so many great players, the power of the great and grooving timing of those drummers, bass players and guitarists playing together. The SoloDallas House of Rock had its beginnings in the basement of founder Filippo Olivieri’s home in Rome, Italy. Fil had created a YouTube channel under the screen name “SoloDallas.” Before he knew it, the channel had gathered over fourteen million video views and thousands of loyal subscribers and grew into a beautiful community of like-minded guitarists as they all interacted through the comments sections on Fil’s fun, educational, and always quirky comments, descriptions and videos. Devoted to this community, Fil quickly gained a reputation as someone who was always willing to take the time to help aspiring guitarists with even the most basic questions about equipment, style, technique, variations and notable signatures. SoloDallas.com became home to thousands of avid guitarists and tone hunters dedicated to keeping that fast-disappearing, authentic, incredible sound alive.

As one of the nation’s most sought after players, Joel McDonald sits at the tip of the spear of Australia’s most influential guitarists. Being lead guitarist and musical curator for Frankie’s World Famous House Band (of cult venue Frankie’s Pizza, Sydney), both locals and savvy visitors alike bear witness to the cutting edge of hard rock guitar – a residency that has seduced some mighty collaborations with acts including KISS, Guns N’ Roses, Whitesnake, The Cult, and Five Finger Death Punch.

James Morley achieved fame as a member of legendary Australian band and Australian Hall of Fame inductees The Angels. Their most successful period saw them achieve multi-platinum album sales and a solid spot at the top of the Australian Charts. Since then, Morley has recorded and performed with an array of the world’s best artists from bands such as AC/DC, Richard Clapton, Def Leppard and Meatloaf, and featured in the 2004 movie Thunderstruck playing the part of iconic AC/DC guitarist Angus Young.

Cynthia Gallie is fast becoming Australia’s newest dynamic female rock vocal sensation. After leading the charge for the “Bon But Not Forgotten” support slot in July 2017, Cynthia captivated audiences with her mind-blowing vocals that rival the best. Compared to the likes of Australian iconic bands The Divinyls and The Baby Animals as well as ’70s rock band Heart, Cynthia does justice to Bon and Brian like never before. Have you ever heard someone belt out ‘Back in Black’ like Brian did in 1980? You will now!

AC/DC’s co-founder, rhythm guitarist, backing vocalist and songwriter Malcolm Young has died aged 64. The legendary guitarist passed away surrounded by family, following a long battle with dementia. He was born on January 6, 1953 in […]

By Jason Perry | Go Venue Magazine …and the band played on.   It’s nothing short of miraculous that legendary hard rockers AC/DC were able to record their most recent album, the stunningly fresh-sounding Power Up, at all. The […]

British Heavy Metal legends Saxon will deliver a full-roar-fun-down set of covers with their latest album Inspirations, which drops a brand new 11 track release featuring some of the superb classic rock songs that influenced Biff Byford & the band. […]