Tonight the demons descended upon The Concert Lounge in Riverside, California. Abbath, Midnight, and Devil Master are currently on tour with Obituary, but had the night off from the tour for this show. It’s not often I drive to Riverside from Los Angeles, but for this line up, it was a must! 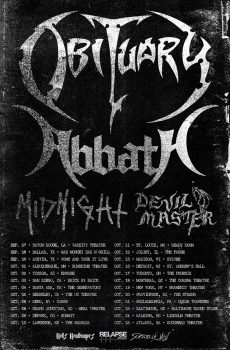 Devil Master got the evening started. This band recently made their LA debut a few months back when they opened for Lucifer. These guys hail from Philadelphia and bring a mix of metal, punk, and all the evil things that make your nightmares come true. They released their debut album Satan Spits on Children of Light earlier this year on Relapse Records. They are definitely getting the attention of the underground metal scene and tonight was no exception here at The Concert Lounge. If you plan to catch this tour, get there early as you don’t want to miss these guys.

Next up was Cleveland’s finest, Midnight. The band just signed to Metal Blade records and released their first single, “Rebirth By Blasphemy.” Their full album is scheduled to come out early next year. Tonight they ripped through songs like “Satanic Royalty,” “You Can’t Stop Steal,” “Poison Trash,” “Penetratal Ecstasy,” “Evil Like a Knife” just to name a few. They concluded their set with “Unholy and Rotten.” Not only do they have awesome songs, but they also have some of the best merch out there. A killer set from these guys as usual.

It was now time for Abbath to hit the stage. These guys are led by Abbath Doom Occulta who is the formerly of Immortal. Norwegian black metal in it’s finest form as they took the stage with their black metal stage gear and faces painted like corpses. They played a good mix of songs including a couple of Immortal songs. The crowd could not get enough as they kept headbanging and holding up their devil horns to Abbath as if they were pledging their allegiance to Satan himself. Riverside will never be the same.

You can catch all these bands on tour currently with Obituary. Tour dates listed here: http://obituary.cc/events.html

Check out set lists and pics from tonight’s event below.

First time in the USA! Non Servium at the Observatory in OC on September, 1, 2018

BY GLORIA SKULLS, GO VENUE MAGAZINE Non Servium performance at the Observatory in Santa Ana, California was outstanding! Watching these guys perform live is a must, 5 guys on stage one of them lead singer but […]

LIVE REVIEW: HYDE Kicks Off Fall US Tour With Starset

BY MAURICE NUNEZ | Go Venue Magazine Wednesday, October 2, 2019 – Tonight was in town and was playing at the Regent Theater in Los Angeles. This would be my first opportunity to see HYDE […]