YouTube Music and the National Independent Venue Association (NIVA) today announce Save Our Stages Festival, #SOSFEST, a three-day virtual music festival featuring all original content on Friday, October 16 through Sunday, October 18. The festival will be hosted by Reggie Watts and feature performances from 35 artists recorded live from more than 25 independent concert venues across the United States. These artists join YouTube and NIVA to amplify the message of NIVA’s Save Our Stages advocacy efforts and raise funds for its nationwide, need-based grant program to provide relief to these important members of the independent music, comedy and arts community. #SOSFEST will livestream in its entirety on NIVA’s Official YouTube Channel with segments simultaneously airing on performer’s Official Artist YouTube Channels. Fans can donate directly to the NIVA Emergency Relief Fund,  which benefits independent venues in peril, on NIVA’s Official YouTube Channel now.

Watch the #SOSFEST trailer below:

An innovative virtual music festival and fundraising event, #SOSFEST will feature original performances, content, and commentary from a diverse selection of artists across a variety of music genres.

Presented by Bud Light Seltzer who will donate $1 million to NIVA as part of #SOSFEST, and with the help of production and livestream partners Big Room and Bulldog Digital Media, performances are being shot in some of the nation’s most storied independent concert venues, all with the common goal of preserving our nation’s independent venue infrastructure.

“The smaller music venues and the ones that are really struggling are not only culturally important, they are emotionally important,” shared Dave Grohl of Foo Fighters.

“Live concerts are the heart and soul of the music industry so it’s critical we do everything we can to save independent music venues,” said Lyor Cohen, Global Head of Music at YouTube. “We are honored to partner with NIVA and create #SOSFEST which gives fans an opportunity to virtually connect with their favorite artists and venues, while doing their part to save these cherished stages. YouTube is in it for the long-haul and we hope you are too.”

“Our nation’s most-loved venues are fighting to hold on because they’ve had no revenue since they’ve been shuttered by the pandemic in March,” said Stephen Sternschein, NIVA’s board treasurer and executive producer of #SOSFEST. “It’s been brutal to watch as scores of them go under through no fault of their own while we continue to push for the Save Our Stages Act to pass.  #SOSFEST will help save many of our nation’s most vulnerable and treasured venues by providing a lifeline to make it through this devastating time as we wait for federal relief. We’re beyond grateful for the support from the artists, venues, and production professionals, YouTube, Anheuser-Busch, and the countless volunteers who are all making this possible.  Now the public has the ability to make a difference, too, by donating to the NIVA Emergency Relief Fund. It’ll be fantastic to see the #SOSFEST artists back in our rooms, and I can’t wait to see their performances.”

“During this shutdown, all the uncertainties we have and are experiencing have been very unnerving and have caused a high level of despair,” said Christine Karayan, owner of Troubadour in Los Angeles. “That is why we are so happy and beyond grateful to all the fans and music community for banding together to help and to show their support and love to all the independent venues across the country.  This is our light and hope in our time of darkness.”

“For nearly 40 years, music fans have had a Bud Light in hand while watching their favorite artists perform,” said Azania Andrews Vice President, Consumer Connections at Anheuser-Busch. “We have proudly partnered with iconic artists and venues around the country and now we want to do our part to ensure that small music venues can remain in business for when we can all come together in-person again.”

#SOSFEST will help shape a path forward for independent venues, touring artists and the live concert industry. Through YouTube’s sophisticated and far reaching platform, innovation in digital fundraising and employment of the most modern safety protocols and production tools for live performance to date, lasting changes can be made.

To learn more about #SOSFEST visit NIVA’s Official YouTube Channel and stay tuned to www.saveourstages.com for updates on the weekend’s full schedule and more! 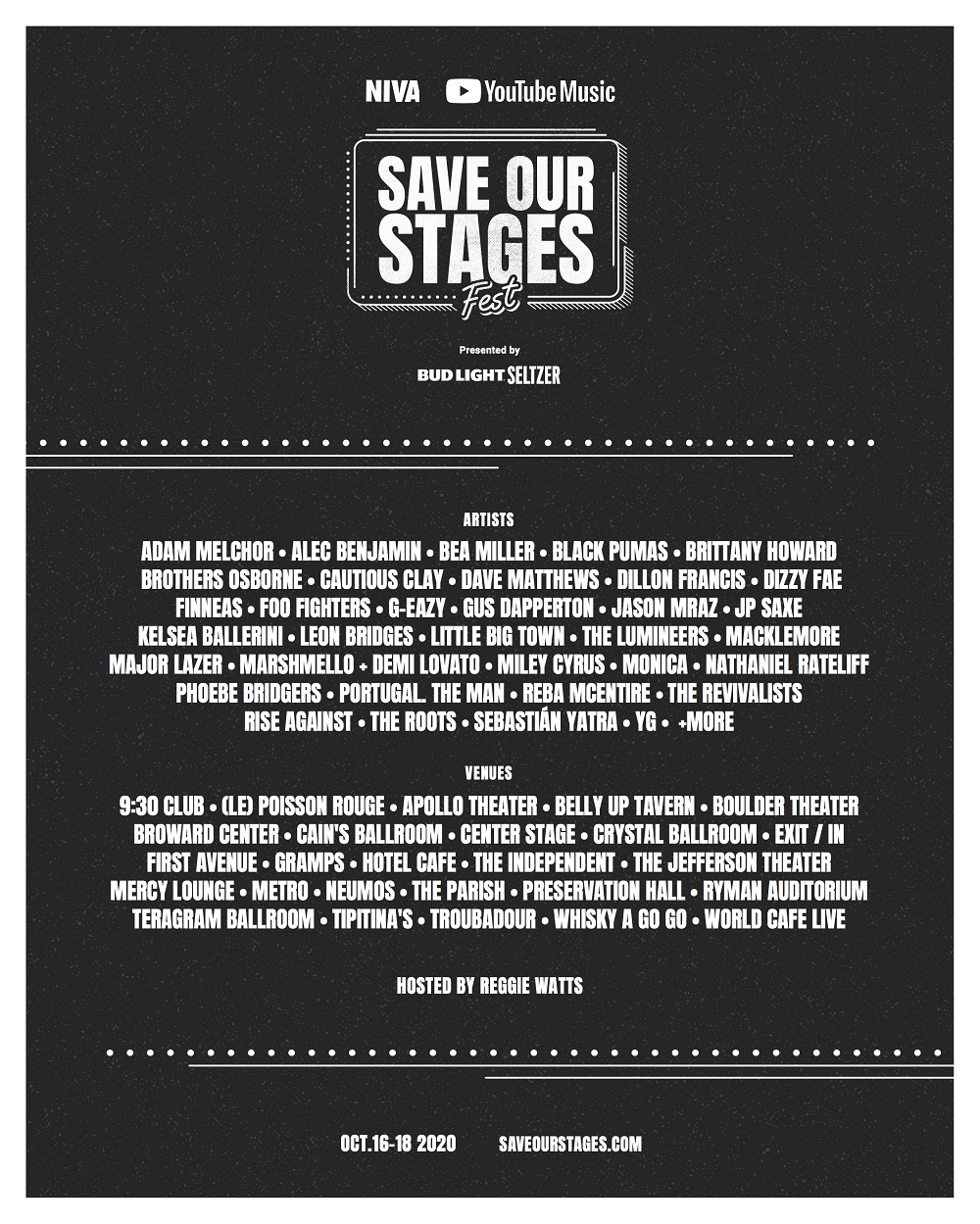 Maha Festival Will Return in 2021 After Cancel This Year

Maha Festival would have been this week had it not been canceled, and in honor of all of that is bright, sunny, and possibly a little sweaty, the organizer shares some news: the 2021 festival […]