Tonight [Friday, November 29, 2019] I was covering Watain who is part of the 2019 US Sickness Tour featuring Incantation and headliners Morbid Angel. This evening’s event was ‘Sold Out’ at Brick by Brick located in San Diego, California. This was evident by the loyal Watain fans lining up as early as 3pm. I arrived early and had the honor to witness the band’s sound check. This gave me a glimpse of what was in store for the show. 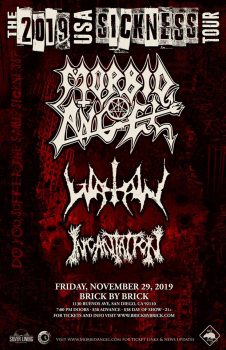 If you are not familiar with Watain, they are a black metal band that hale from Uppsala, Sweden. They formed back in the late 90’s and are well known in the black metal scene. Their dark imagery combined with their extreme metal sound make for quite the experience when seeing them live. Their live shows include pyrotechnics, candles, satanic rituals, animal carcasses, and blood.  What more could any extreme metal fan want?

Watain took the stage by 9:00pm and by then the venue was completely packed. Vocalist, Erik Danielsson appeared and lit two torches on each side of the stage each held up by an inverted cross. It appeared as if they were ready to begin their ritual. The band started their set with “Sworn to the Dark” then went right into “Nuclear Alchemy.”  I must say that the San Diego fans were headbanging and moshing to the brutally that the band brought forth the entire tonight. The music was loud, intense, dark and in your face. Aggressive black metal at it’s finest.

San Diego even got a special treat this evening as the band did a cover of a GG Allin‘s song “Fuck Off, We Murder.”  That was a killer surprise!

The band concluded their set for the night with “Total Funeral” and “On Horns Impaled.” A brutal end to a brutal set by Watain.

The tour continues through December 21st where it ends on the East Coast in Ft. Lauderdale, FL. To see a full list of tour dates go to: www.morbidangel.com/welcome.html

See full setlist and photos from tonight’s show below:

BY MAURICE NUNEZ | Go Venue Magazine Tonight, Rob Halford and Judas Priest played at the Toyota Arena in Ontario, California.  This venue is about an hour and half outside of Los Angeles. I had […]

CONCERT REVIEW: Windhand at The Roxy in Los Angeles

Monday, April 23, 2018 – Last time Windhand, a doom metal band based out of Virginia, was in Los Angeles, they played the Roxy. They were back at the The Roxy Theatre this time around. It […]