Celebrated purveyors of heavy rock THE DAMNED THINGS have released their 2nd single, “Something Good,’ from the band’s eagerly anticipated, upcoming album, High Crimes, that’s due April 26 via Nuclear Blast Records. Fans can stream the new track now and watch the lyric video below.

Vocal powerhouse Keith Buckley comments on the new song: ““Something Good” is a feel-good song about feeling bad. It’s about hurting people you care about because it is not in your nature to do the right thing even when you want to. A dark moral story with a really sunny feel.”
More from High Crimes:
“Cells” Official Music Video – https://youtu.be/ZKdULf6iCng
Video Trailer #1 “Band Lineup & Sound” – https://youtu.be/0WD1eBeZA2Q
Video Trailer #2 “About The Song “Cells”” – https://youtu.be/tRSD-NLOqR0
Pre-order High Crimes in various formats, here: nuclearblast.com/thedamnedthings-highcrimes
Pre-order the album digitally to receive “Cells” and “Something Good” instantly (Amazon and iTunes only)! 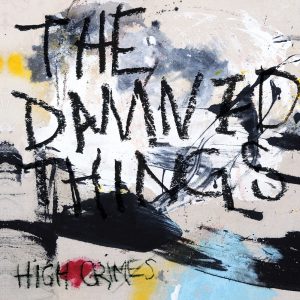 High Crimes was produced by Jay Ruston (ANTHRAX, STONE SOUR, AMON AMARTH) and is the follow up to 2010’s hugely successful debut album, Ironiclast.
Nine years ago, Scott Ian – guitarist and co-founder of legendary thrash metal outfit, ANTHRAX – took a meeting with the Joe Trohman  (also a guitarist, and a co-founder, of the band FALL OUT BOY). He and Scott hit it off, and started making songs together.  With the help of drummer Andy Hurley (Fall Out Boy) and the irreverent vocals of Keith Buckley (EVERY TIME I DIE), THE DAMNED THINGS were formed. The band has gone through changes since its inception and now features Dan Andriano of ALKALINE TRIO on bass.
THE DAMNED THINGS will kick off a month long headlining U.S. tour on May 1st with an intimate and undoubtedly unruly show at The Whisky in Los Angeles and will wrap in San Diego on May 25th. Tickets are onsale and going fast at thedamnedthings.com.
THE DAMNED THINGS Tour Dates:
May 1 – Los Angeles, CA – The Whiskey
May 4 – Jacksonville, FL – Welcome To Rockville
May 6 – Lancaster, PA – The Chameleon
May 7 – Brooklyn, NY – Brooklyn Bazaar
May 9 – Pittsburgh, PA – The Rex
May 10 – Nashville, TN – The Cowan
May 11 – Rockingham, NC – Epicenter Fest
May 12 – Lexington, KY – Manchester Music Hall
May 14 – Grand Rapids, MI – Elevation @ The Intersection
May 16 – Flint, MI – Machine Shop
May 17 – Chicago, IL – The Bottom Lounge
May 18 – Springfield, MO – Outland Ballroom
May 19 – Dallas, TX – Gas Monkey
May 21 – Denver, CO – Oriental Theater
May 22 – Colorado Springs, CO – Black Sheep
May 24 – Tempe, AZ – Tempe Marketplace (KUPD Concert Series)
May 25 – San Diego, CA – Brick By Brick

This summer, Anthrax and Black Label Society will bring some of the finest thrash and heavy metal to 24 North American cities when they kick off a five-week tour on Tuesday, July 26 at Van Buren in Phoenix, […]

THE DAMNED THINGS RELEASE ANIMATED VIDEO FOR “SOMETHING GOOD”

Fresh off the release of their critically praised new album, High Crimes, heavy rock powerhouse THE DAMNED THINGS has released a brand new animated video for their fan-favorite single “Something Good.” Watch it now below […]

Thrash legends Anthrax based out of New York City delivered their killer performance at the Sokol Auditorium in Omaha, Nebraska on Saturday, April 29, 2017, in supporting of their 27-date North American Killthrax Tour, co-headlined with […]