Tuesday, October 6th, 2020 will see the release of the must-see documentary film, ‘Bay Area Godfathers.’ Issued as part of the popular ‘Inside Metal’ series, ‘Bay Area Godfathers’ was directed by Bob Nalbandian and produced by Warren Croyle, and features in-depth interviews with Bay Area metal icons and pivotal players – musicians, managers, journalists and label execs. ‘Bay Area Godfathers’ is a 2-part movie (Part 2 will be released separately) and is the 4th movie in the Inside Metal series.

The trailer can be viewed here: https://youtu.be/vTotWE09Gh4

And an interview with director Bob Nalbandian and co-producer John Strednansky can be viewed here: https://youtu.be/9ogzMNGXA-Y

MetalRock Films takes you on a transcendental journey into heavy metal yesteryear covering the golden era from the late ’70s into the early ’90s, when the local hard rock and metal scene of the San Francisco Bay Area literally took the world by storm. Packed with exclusive interviews, ultra-rare archival concert footage and photographs of the influential artists of that groundbreaking era.

Featured are Metallica, Megadeth, Exodus, Y&T, Testament and many more.

Regarding the Inside Metal series, Metal Hammer Magazine claims it is “Packed with dozens of interviews with scene veterans both legendary and obscure, the film serves as both a compelling heavy metal history lesson and a love letter to a local scene whose moment in the sun was fleeting, but whose impact still reverberates today.” Additionally, TV host/DJ Eddie Trunk declared that the series “Tells the true story behind rock’s aggressive genre and my personal favorite”; while acclaimed video director Jonas Akerlund said ‘It captures an era that catapulted metal into the spotlight and takes the audience on a wild ride down memory lane. After watching it, I wanted to get in my time machine and experience those days for the first time. You’re hit with a potent nostalgia, a time I thought we couldn’t get back, not until I saw this film. I can’t get enough of this shit, what an amazing film to watch over and over again, well done!’

Just in time for the holiday season 2020, ‘Bay Area Godfathers’ will undoubtedly appeal to both the newcomer who is looking to learn more about metal history, and the old school fan, interested in reliving metal’s glory years! 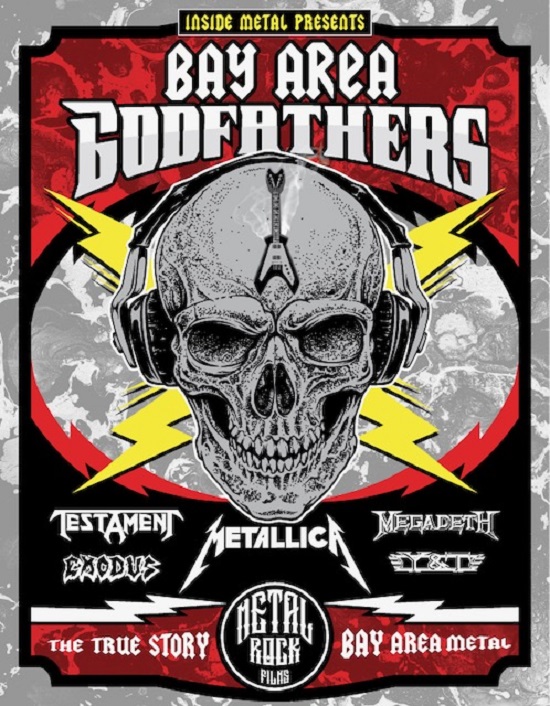 Today, Slayer releases Episode 2 of its “Slayer Looks Back on 37 Years” video interview series.  You can check it out here: In this episode, Tom Araya and Kerry King talk about Slayer’s earliest shows, […]

Nuclear Blast is proud to announce the US leg of “The Bay Strikes Back Tour” featuring thrash legends TESTAMENT, EXODUS, and DEATH ANGEL. The 30 date trek will kick off on October 6th at the Fremont […]